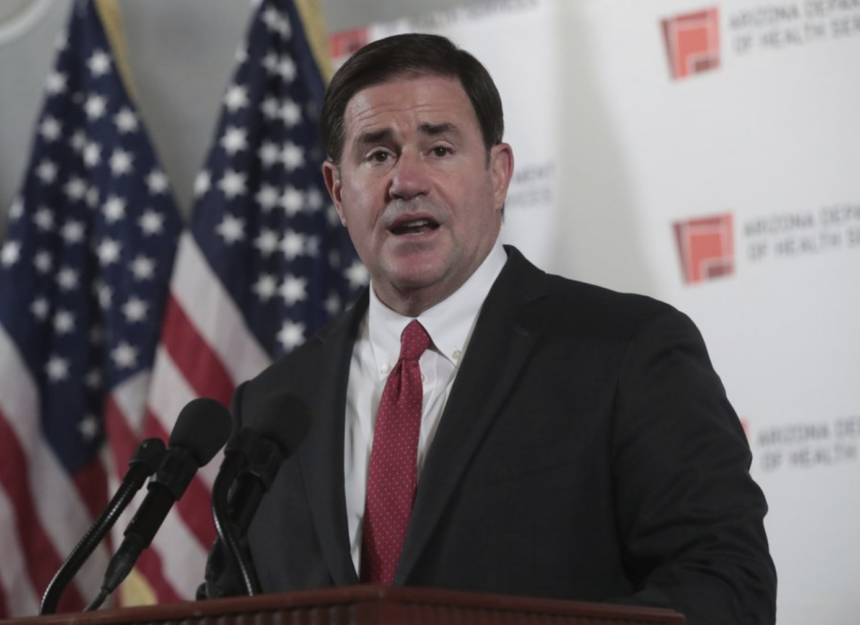 PHOENIX (AP) — Arizona Gov. Doug Ducey on Wednesday warned that coronavirus cases are increasing at an alarming rate but stopped short of implementing any major new virus prevention restrictions or imposing a statewide mask mandate — despite pressure from Democratic state and local officials.

“I want people to wear masks. Masks work,” Ducey said, adding that 90% of the state already has mask mandates imposed by county and local officials.

Ducey said the state health department will issue an emergency order for schools to require masks on campuses and buses. State schools chief Kathy Hoffman, a Democrat, has pushed the governor for a statewide mask mandate, as has Democratic Phoenix Mayor Kate Gallego.

But he said a statewide mandate was not necessary.

“I think the steps that we’ve put in place, the participation that we have, has got the maximum amount of compliance with Arizonans wearing a mask,” Ducey said. “In addition, it’s nearly impossible to participate in our economy anywhere without wearing a mask.”

He noted that local jurisdictions that cover 90% of the state’s population have mandates in place, and state orders require masks in gyms and some other businesses.

Gallego said in a video released after Ducey’s remarks that she was “deeply disappointed” he didn’t order masks be worn statewide and urged all Arizonans to wear one even if the governor did not issue a mandate.

“Public health officials and physicians agree masks are the No. 1 step we can take today to protect our public health,” Gallego said. “The virus is surging in Arizona, our health care leaders are very worried about capacity. We have the chance to save lives.”

The state Department of Health Services on Wednesday tallied 3,206 newly confirmed virus cases and 53 more deaths. Arizona now has had 283,102 cases and the state’s COVID-19 death toll stands at 6,365.

According to the state’s COVID-19 dashboard, the number of hospitalizations is now on par to where it was amid a June virus surge, with 1,700 patients. Those hospitalized now include nearly 400 people in intensive care unit beds.

State health director Dr. Cara Christ said that the positivity rate for cases in all but two Arizona counties was above 10%, raising serious concerns.

Ducey said Christ will issue the emergency order to ensure masks are worn in schools and on school buses. Ducey said he wants schools to stay open because it’s the best thing for children.

“Despite the best efforts of teachers and parents, no one can argue, kids have already missed out on far too much learning due to this pandemic,” Ducey said.

He also said the state would start providing COVID-19 tests at the main Arizona airports in Phoenix, Mesa and Tucson, and that it will invest $25 million to bolster hospital staffing. That money can be used to hire staff or provide bonuses.

Arizona had approximately 3,500 hospitalizations on a daily basis in mid-July during the peak of last summer’s surge but fewer than 500 some days in late September before the latest rise started.

The number of infections is thought to be far higher because many people have not been tested, and studies suggest people can be infected with the virus without feeling sick.

Health officials have said the state’s recent surge is tied to factors including businesses and schools reopening and public fatigue with precautions such as mask-wearing.