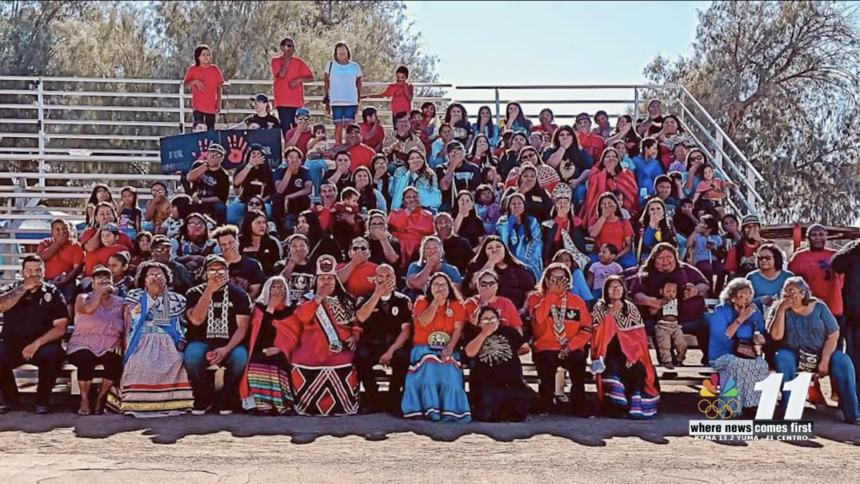 YUMA, Ariz. (KYMA) - In indigenous communities, nearly everyone knows someone whose friend, sister, daughter or aunt has gone missing and murdered.

The numbers are staggering and the data in these cases are typically under-reported.

Many native families are overwhelmed by a lack of priority in terms of dedication and commitment to cases of missing and murdered indigenous women (MMIW).

However, as history has proven, the indigenous communities are resilient and will not give up until they find out, "Where are their stolen sisters?"

Claudette White, associate judge of the Quechan Indian Tribe said, “I scroll through social media every day looking for cases of missing people to share or to get information out.”

“I read a post recently, a young native woman posted if I don’t come home please look for me because it's not by my will that I’m gone."

MMIW, an epidemic silently trickling its way through the sacred lands of Indian reservations.

“It feels like we have targets on our back.”

As tribal reservations are vastly diminishing, one by one, thousands of indigenous women are seemingly disappearing without a trace.

Almost 6,000 indigenous women reported missing in 2016, only 116 were logged into the justice department's missing person database.

According to the U.S. Department of Justice, Native American women face murder rates that are more than 10 times the national average.

“We’re less than two percent of the entire population in the United States. That automatically makes us exotic and desired.”

Grassroots research reveals the majority of murders are committed by non-natives.

“Concepts of romanticizing Native American women. Pocahontas…poca-hottie. Conquering and being with native women and not really seeing us or valuing us as people. So to victimize us is easy for people.”

The Quechan reservation is known for its sacred sights that straddle the Arizona and California regions of the Colorado River; two states with the highest number of MMIW cases in the country.

“We held the ceremony here on the reservation for murdered and missing indigenous women. We had a large number of people come out and families coming forward to talk about their own family members who had gone missing that they had never seen again or people in their family who they know were murdered and never solved.”

“The Quechan Police Department has only been in place since 1996. Prior to that our reliance has been on state law enforcement or federal law enforcement.”

But can natives truly rely on state and federal law enforcement to solve cases involving MMIW?

Truth is, if a native woman goes missing from a reservation, the challenge becomes which agency will investigate the case?

This is due to jurisdiction limitations.

“When our people go missing there is no go-to, no guide book, no policy to say what should be done.”

Under supreme court ruling and acts of Congress, most tribes can only charge their own members with a crime.

Therefore, they must call on state and federal agencies to do so; oftentimes leaving the families left to lead their own investigation process.

“We walk these areas and these lands looking for any sign of evidence trying to find your loved one with no real help.”

“It shouldn’t take me to have to convince a federal agency that they have responsibility. Often we’re just left wondering. We don’t know that things are formally closed out.”

Native women across the country have joined forces to bring national awareness to MMIW, advocating for solutions to discrimination and violence against indigenous women.

As she campaigns for change, back on the reservation, White continues to honor the spirits of her stolen sisters.

“Prayer, song, dance, giving to them, honoring them. Those that are gone and those that are still missing spiritually trying to remember them, we offer song and dance to help them along their way if they’re stuck trying to make their transition to the next life."

However, Claudette White and several other MMIW advocates were unimpressed by the lack of native representation included on the board of Operation Lady Justice; still left to feel indigenous women’s voices are invisible.