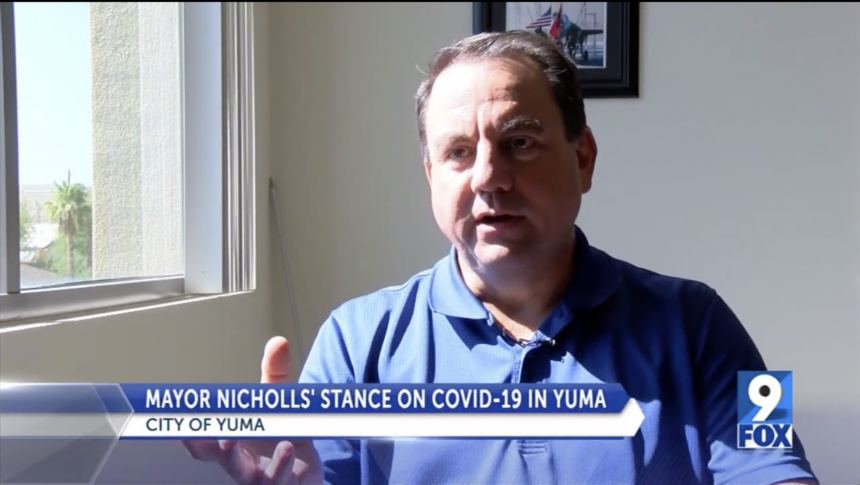 Nicholls believes only time will tell if the city truly handled this pandemic properly.

YUMA, Ariz. (KYMA, KECY) - City of Yuma Mayor Doug Nicholls speaking out after being accused of not taking the lead in our local fight against coronavirus.

Four months in, over 10,000 positive cases and hundreds of lives lost, Mayor Nicholls believes only time will tell if the city truly handled this pandemic properly.

He said, “A situation where this is no handbook, there is no path forward, I think we’ve handled it well. However, there could have always been better.”

But is there a right answer when faced with a global pandemic?

Some residents disagreed with the mayor voting against the mask mandate, ultimately approved by the city council last month.

Nicholls declined to speak on that decision, saying, “I’m really not going to go back into that vote because we unify behind the votes of the council.”

Locals also criticized Nicholls for his backseat approach throughout the pandemic, comparing him to mayors of San Luis and Somerton who’ve actively spoken out.

In Wednesday's one-on-one interview, Nicholls pointed at the numbers.

In previous months South County has accounted for close to half of the COVID-19 cases in Yuma County, with Somerton far surpassing numbers than San Luis.

Mayor Nicholls says although the county is divided into three cities, Yuma is one community.

“We’re not trying to pit one city against another, we’re in this together. We have one set of medical resources. We have one economy essentially in the way we relate and the way people work. So to try to dice it up, it's not really effective to how we can manage this virus.”

The mayor has unashamedly stated he is following the governor’s lead on mandates and restrictions and leaving it up to the county health department for the data.

“They’re the ones that can knowledgeably talk about the impacts that happen on a pathological level or any sort of level of the virus that I don’t have the resources on,” he said.

Mayor Nicholls is paying close attention to the deaths per day as a strong indicator of change.

“We have not dropped in deaths per day in weeks and ultimately that is really where the mandate is focused on, to prevent those who are at risk from getting the virus and dying."