In her first interview since Roe v. Wade was overturned on Friday, Vice President Kamala Harris told CNN’s Dana Bash that she never believed former President Donald Trump’s Supreme Court picks, whom she voted against in the Senate, would preserve the landmark abortion law.

“I never believed them. I didn’t believe them. That’s why I voted against them,” the vice president said in an interview on Monday when Bash, pointing to Justices Brett Kavanaugh and Neil Gorsuch’s previous statements underscoring Roe v. Wade’s long-held precedent, asked Harris whether she believed the two justices intentionally misled the public and Congress during the confirmation process.

“It was clear to me when I was sitting in that chair as a member of the Senate Judiciary Committee, that they were … very likely to do what they just did. That was my perspective. That was my opinion. And that’s why I voted like I did.”

Her comments come shortly after Maine Republican Sen. Susan Collins said publicly that she feels misled by Kavanaugh, who she says reassured her that he would not overturn Roe v. Wade.

Harris, who was flying on Air Force Two from Washington to Illinois on Friday to unveil the administration’s latest strategy to improve maternal health in the US when the decision came down, said she was shocked by the ruling.

“This is not over,” she added, referring to how she sees the conservative court majority’s intentions on other existing rights.

Conservative Justice Clarence Thomas indicated in a concurring opinion for the ruling that the court should revisit other cases of precedent that ensure rights related to same-sex marriage and contraception.

“I think he just said the quiet part out loud,” Harris said about Thomas. “And I think that is why we all must really understand the significance of what just happened. This is profound. And the way that this decision has come down, has been so driven, I think, by the politics of the issue versus what should be the values that we place on freedom and liberty in our country.”

Harris said the administration “will do everything” within its power to defend access to medication abortion. And she suggested the administration is looking at ways to provide women in states where the procedure is banned the resources they’d need, like child care and travel funding, to access it in other states.

But appearing to reject a growing request from Democratic lawmakers, Harris said the administration was not currently discussing using federal lands for abortion services in and around states that will ban the procedure.

“It’s not right now what we are discussing,” Harris said.

Calls for Biden to allow abortion providers to work from federal property have raised concerns among some lawyers. And providing federal funding for women to travel out of state has the potential of running afoul of the Hyde Amendment, which prohibits federal funding of abortions in almost all cases.

A White House official on Monday made a similar argument, saying: “While this proposal is well-intentioned, it could put women and providers at risk. And importantly, in states where abortion is now illegal, women and providers who are not federal employees could be potentially be prosecuted.”

When pressed on what else a Democratic-controlled White House, Senate and House could do to protect abortion rights, Harris specifically pointed to Congress and the role the legislative branch could play in codifying abortion rights — if Democrats had the votes. She repeatedly pointed to the importance of the 2022 midterms as an opportunity to elect more Democratic senators who support abortion rights.

But when asked whether Congress could do something sooner if the Senate filibuster were eliminated, she would not say whether she would support eliminating the 60-vote threshold in order to pass abortion protections.

“I think that (the President) has been clear about where we stand on this issue of reproductive health and what the President and our administration have within our toolkit to do and, so far, that’s what we’ve been pursuing,” Harris said.

Biden told CNN’s Anderson Cooper at a town hall last year that he would be open to altering the filibuster to pass voting rights legislation “and maybe more.”

During Monday’s wide-ranging interview, Harris emphasized that inflation remains a priority for the Biden administration. But she did not directly answer when asked whether she believes the United States is heading toward a recession or discuss any new tools the administration could use to address rising prices.

“I think that there can be no higher priority than what we have been clear is our highest priority, which is bringing down the costs and the prices as much as we possibly can — and we will stay focused on that,” the vice president responded.

As the House select committee investigating the January 6, 2021, insurrection gears up for an unexpected hearing on Tuesday, Bash asked Harris whether the hearings so far have changed her perceptions of her predecessor.

Harris commended former Vice President Mike Pence “for having the courage to do his job” when he refused to overturn the results of the 2020 presidential election despite pressure from Trump.

The vice president declined to say whether she would support bringing criminal charges against Trump based on the findings presented by the committee.

Harris did not mince words when asked about 2024, as some critics have questioned whether the 79-year-old President will seek reelection. Bash asked her about comments from House Majority Whip Jim Clyburn, a Biden ally representing South Carolina, that if the President did not run, Clyburn would support Harris leading the ticket.

“Joe Biden is running for reelection, and I will be his ticket mate,” Harris said. “Full stop.”

This story has been updated with more information.

CNN’s Kevin Liptak and Donald Judd contributed to this report. 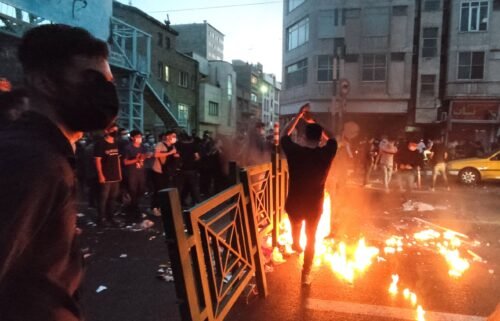