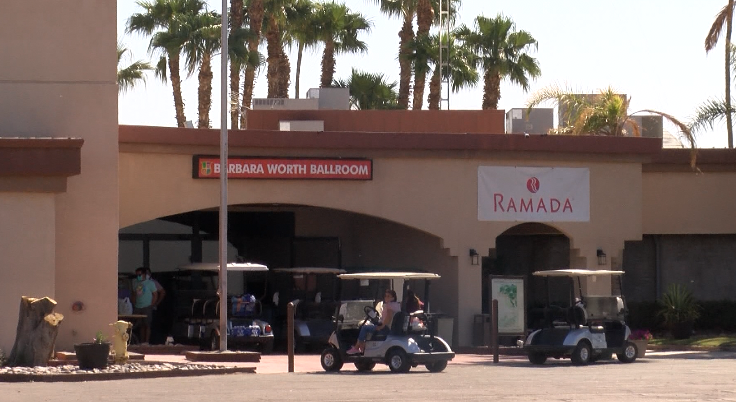 HOLTVILLE, Calif. (KYMA, KECY) - With the help of funds from the state of California, migrant families are being housed at the Ramada Hotel at Barbara Worth Country Club in Holtville.

Local non-profit the Sure Helpline Crisis Center is in charge of the operation. The non-profit has volunteers and staff on the grounds who are helping receive families and deliver resources to them like food and clothes.

According to the executive director of the Sure Helpline, these families are in quarantine.

"Most of these people are people who have been released to us from the El Centro Sector Border Patrol," said Margaret Sauza, Executive Director Sure Helpline Crisis Center.

Sauza says those being housed are undocumented immigrants who are seeking asylum.

She said the immigrants include people from Russia, Brazil, Syria, and Honduras. They have not receive any immigrants from Mexico or unaccompanied minors.

Sauza said they do have seven children stay at the hotel with their parents, some include infants.

The Sure Helpline Crisis Center welcomes any donations of clothes and toys for the migrant families. Sauza says donations can be dropped off at their center at 654 Main Street in El Centro.

We spoke to some locals from the city of Holtville who declined an interview, but they said they weren't happy to hear migrants were being housed right in their backyard.

"I know we are the United States of America, but we can't feed everyone," said one resident.

It was also a hot topic on social media, some people alleged that people who were staying at the country club were asked to find alternative housing and were given seven days to vacate.

This comes at the heels of the Border Patrol El Centro Sector saying they apprehended 208 undocumented immigrants within a 24 hour time period on Wednesday. According to border patrol it’s their biggest spike in apprehensions within the last decade.

Frida on 13 On Your Side at 4:00 p.m., Alexandra Rangel speaks to Imperial County about how they're ensuring those being released by border patrol aren't exposing the community to COVID-19.