TUCSON, Ariz., (KYMA, KECY) - One of the greatest collegiate coaches of all-time is getting his final send-off.

Years from now, when you look up the definition of softball, Mike Candrea's name will be included.

The man who transcended the game of softball at the collegiate level held his final press conference with the University of Arizona on Tuesday.

As Candrea retires from the Wildcats head coaching position held for 36 years.

The Wildcats Athletics family gathered to hear his final words, as he acknowledged everyone in the program; from the players, administration, volunteers, and even fans for the success of Wildcats softball in that span of time.

Candrea also gave a special shoutout to this year's cats softball team that overcame the COVID-19 Pandemic, to make it to the program's 24th appearance in the Women's College World Series.

"And we all hurt, Because one of the standards that the these ladies said was, you get to the World Series, you win the World Series. And it's getting tougher and tougher. But I can promise you one thing, I told every one of them I can look them in the mirror right now. And I love what they did for this program this year. It was a tremendous ride. They did it with class and did it with dignity. They're great people. They're great students."

Mike Candrea - U of A former Head Softball Coach

The legendary coach won 8 national titles and more than 1600 games.

This feat will be hard to be matched in any sport. 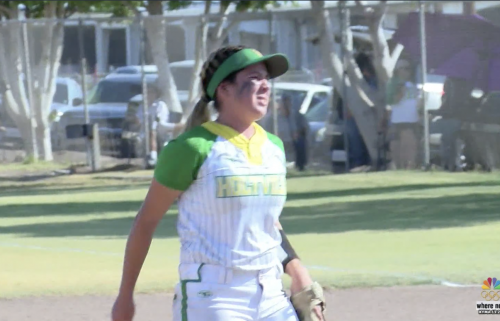