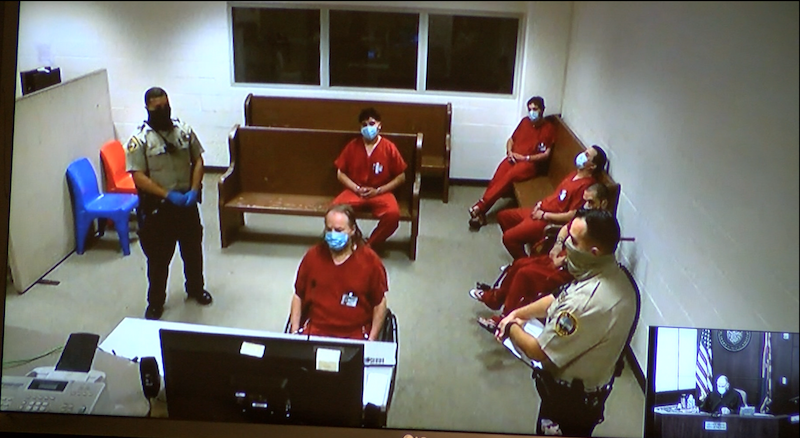 YUMA, Ariz. (KYMA, KECY) - 61-year-old James Ebsch appeared virtually in Yuma County Superior Court on Wednesday, where he was charged with one count of arson of an occupied structure, and one count of aggravated assault per domestic violence.

On Monday, Yuma Police Department (YPD) and Yuma Fire Department (YFD) were called to a home just before 10:30 AM in the 1300 block of S. 8th Avenue. The house, which was undergoing renovations to be put up for sale, is now boarded up and unoccupied.

Teresa Caskey, Ebsch's sister, has taken care of her brother for the past nine years. Ebsch was diagnosed with dementia, and according to the family, he was regularly taking his medicine. Caskey's daughter, Tresca Schmidt, said there was an argument over money which may have lead to the fire.

“He accused my mom - because she’s his fiduciary - his power of attorney, and it’s not the first time he’s accused my mom of stealing his money. But it didn’t happen, she was taking care of him... but the dementia, he was arguing with her then next thing we know, this is what’s happening", said Schmidt.

YPD arrested Ebsch on a count of premeditated murder in the first degree, among other charges. However, that charge appears to be off the table for now. News 11 spoke with the family after Ebsch's initial court appearance. The family is upset Ebsch isn't being charged with murder, and is hoping more charges are brought forward as the case continues.

Teresa said many people stopped their cars when they saw the fire and immediately got out to help. She has a message for the community and first responders who came to the rescue in the family's darkest hour.

“I want to thank them for all their support. There were so many people who came and helped us, my neighbors, just strangers pulling over just helping us. I want to tell them thank you so much. I don’t know who they were… and the fire department, the police they were all so great."

Ebsch is being held on a $200,000 cash bond, and will undergo a mental health evaluation. He is set to appear back in court on January 24.

Although Teresa has since been discharged, she still has a long road to recovery. She is currently undergoing treatment for her burns in Phoenix. A GoFundMe page has been set up to help the family.