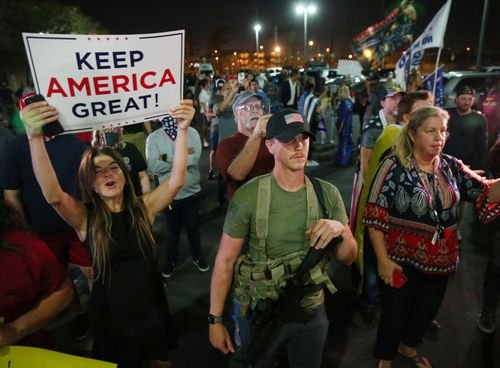 PHOENIX, Ariz. (KYMA, KECY) - A large crowd of Trump supporters has gathered outside a Phoenix polling center to protest what they call the theft of the Presidential Election.

NBC News' Gadi Schwartz reported on the situation just before nine Wednesday evening in a live report during the network's continuing Decision 2020 coverage. Schwarz reported seeing a number of armed individuals in the crowd.

The Arizona Republic reports there were more than a hundred people in the crowd. The newspaper said they were part of a rally organized by a right-wing radio host. It began at the State Capitol then moved to the the Maricopa County Tabulation and Election Center.

The report said newly reelected Congressman Paul Gosar, who represents part of Yuma County, spoke to the demonstrators at the Capitol before they moved to the Election Center.

Schwarz reported the protest was getting steadily larger, as was the police presence in the area. He said Maricopa County Sheriff's deputies were seen escorting election workers out of the building and into a waiting van to shield them from the protest. It's unclear where the van took the workers.

Schwarz reported at one point protestors chanted derogatory phrases about Fox News. The NBC reporter said demonstrators told him they were angry with Fox for calling the election in favor of Biden. He also said protestors claimed Democrats were stealing the election from President Trump.

Schwarz said social media posts about the use of Sharpies during the in-person voting process had angered demonstrators. The posts indicate ballots marked with the markers were being rejected, and that most of the rejected ballots came from Trump supporters.

Election workers say they did provide the Sharpies, but say the markers are perfectly compatible with tabulation machines. The Arizona Attorney General is investigating the situation.

KYMA.com will continue to follow the developing situation, and bring you more information as it becomes available.