Terry McAuliffe may be running against Glenn Youngkin, but his ultimate rhetorical opponent in the closing days of Virginia’s off-year gubernatorial race is a Republican who lost a year ago.

And voters at McAuliffe’s rally on Thursday evening with Vice President Kamala Harris clearly got the message.

“He is a bad photocopy of Trump,” Nelson Zaragoza, a mechanic from Stafford, Virginia, said of Youngkin, comparing him to former President Donald Trump. “He supports everything that Trump has been trying to push, he is doing the same thing.”

The level Democratic campaigns in Virginia have focused on Trump over the last few months has turned the off-year elections into the biggest test yet for whether the former President, who motivated historic Democratic turnout for the years he was either on the ballot or in power, still motivates the party’s base to vote in extraordinary numbers. This lesson, determined by how the tight Virginia’s races for governor, lieutenant governor and attorney general end up on November 2, will reverberate within the Democratic Party for years, as both official party committees and outside organizations try to understand how to motivate voters after four years of Trump in the White House.

McAuliffe, a candidate who rarely does subtlety, has not minced words about tying Youngkin to Trump, who remains unpopular in Virginia a year after losing the commonwealth by 10 points. His ads have pilloried Youngkin as a Trump acolyte, the former Democratic governor has repeatedly called him a Trump “wannabe,” and, in the closing weeks of the campaign, McAuliffe is warning that Youngkin and Trump are “running together” and the former President “wants to use this election to get him off the mat to get him ready for 2024.”

This nationalization has played out most notably in Northern Virginia. In cities like Arlington, Alexandria and Falls Church, lawn signs that say “Youngkin=Trump” dot umpteenth patches of grass, as McAuliffe hopes to engage the vote-rich and growing area of the commonwealth that dramatically turned against Trump in 2016 and 2020.

“Despite what some say,” said Susan Swecker, chairwoman of the Democratic Party of Virginia, “Trump and his agenda are on the ballot, too.”

The potency of this messaging is particularly important this year, with Democrats worried that their voter base — which may be exhausted by an endless stream of what they’ve been told are critical elections — is now less interested in turning out for the November election. Polls have backed up these fears, with Republican enthusiasm for the race far outpacing Democratic enthusiasm.

But voters like Zaragoza and others also expressed concerns on Thursday night that some of their friends were not as engaged in this race.

Adina Wells, a 58-year-old woman who attended McAuliffe’s rally with Harris, said many of her friends are “not as engaged” in the gubernatorial race as they were in the presidential election a year earlier because “some of them fail to realize that if you have somebody who supports (Trump in office), that could help him.”

“I don’t want him to get back in,” Wells said of Trump. “That is a motivating factor.”

To counter these worries, McAuliffe and his top surrogates have been looking to motivate Democrats with base-boosting issues like abortion and what they see as a responsible response to Covid-19 while warning that a win for Youngkin would be a win for Trump — who has not campaigned here for the Republican nominee.

“Democrats still get fired up about Trump,” said David Turner, a top operative at the Democratic Governors Association, adding that the messaging is particularly important “when turnout is uncertain, and we need to motivate people to go out and vote.”

Renae Schumann, a voter who stopped by the early voting office in Chesterfield County last week to cast her ballot for McAuliffe, is one of those voters.

“Absolutely he is on the ballot, too,” Schumann said of Trump. “If you are not actively against him, I feel like you’re for him. In no way has Youngkin showed or stated that he’s against him, so in my mind it’s clear.”

A greater test than California

Youngkin has notably looked to localize the race, fighting against nationalizing it in a state that has moved away from Republicans in recent federal elections.

And his campaign argues recent polls showing the race a dead head are the result of McAuliffe making “his campaign all about the past, while Glenn Youngkin focused on his positive vision for the future.”

“Now McAuliffe is sinking and desperate, which is why he is calling in a failed presidential candidate from California to campaign with him,” Youngkin spokesperson Christian Martinez said of the Harris visit. “We’ve said from the beginning that the only person excited about McAuliffe is McAuliffe, and we’ve been proven right.”

Democrats often cite California as proof that focus on Trump in an election works. California Gov. Gavin Newsom, a Democrat, successfully fended off a recall attempt by continually hitting his Republican opponent, Larry Elder, as a Trump acolyte in a state that overwhelmingly rejected the former President nearly a year earlier.

But Biden won California by nearly 30 points. The Golden State, which has a nearly two-to-one Democrat to Republican voter registration advantage, is not Virginia, making the November 2 contest the most notable test of Trump’s ability to turn out Democrats ahead of the 2022 midterms. And while New Jersey also had a gubernatorial race on November 2, the state is also far bluer than Virginia.

“If Trump’s influence had truly died out on January 21st, 2021, you might see a very different campaign today,” said Geoff Burgan, a top strategist for the Democratic Attorneys General Association. “But what we know is that Trump and a lot of Republicans, including the statewide ticket in Virginia, have doubled down on the Big Lie, sham audits and questioning the fundamentals of democracy.”

Virginia Attorney General Mark Herring, a Democrat, has run ads tying the Republican attorney general candidate Jason Miyares to Trump and one of the groups that helped fund the rally around the January 6 insurrection.

Burgan added: “Donald Trump is one of Democrats’ most potent turnout weapons. No doubt about it.”

That is why Democrats seized on a recent Republican rally in Virginia where Trump called into the event and lauded the Republican nominee as a “gentleman” and someone he hopes “gets in there.”

McAuliffe wasted no time jumping on the event, turning it into an ad and a potent fundraising tool that helped raise over $2 million, according to his team.

Youngkin’s strategy — focusing on local issues like education and the economy and less about national trends — is reminiscent of what Republicans did in New Jersey in 2009, where Democrats looked to turn the gubernatorial race into a referendum on former President George W. Bush and leaned on then-President Barack Obama, who had just recently carried that state by over 15 percentage points in 2008. Republicans also won the Virginia governor’s mansion that year.

“Youngkin clearly wants this to be a race that is decided on state and local issues and Democrats want it to be about federal issues. But that is what you would usually see in a very blue state,” said Mike DuHaime, who worked as the lead strategist on former New Jersey Gov. Chris Christie’s successful 2009 campaign. Like Youngkin, Christie brought in few surrogates at all and DuHaime said the campaign declined visits by former vice-presidential candidate Sarah Palin because they wanted to avoid a nationalized contest in a blue state.

The biggest difference between 2009 and now, however, is the antipathy for Trump.

The strategy “shows the ideology shift of Virginia more than anything else,” said DuHaime. “But Trump is very different than George W. Bush. Trump wants to stay in the center of things. George W. Bush faded away and for as unpopular as Bush was, there is a difference between being unpopular and hated vitriolically.”

Even as McAuliffe makes running against Trump central to his campaign, there are some concerns among Northern Virginia Democrats that warnings about Trump are not as potent as they once were with the former President out of office.

Rep. Don Beyer, who has represented much of Northern Virginia since 2015, said all that has been accomplished in Virginia over the last eight years is “at risk with a person who at least half of him aspires to be a Donald Trump acolyte.”

But, he added, there are concerns that people are less focused on opposing Trump than they were when he was on the ballot. “The further we get from the Trump presidency,” he said, “that naturally is going to fade.”

And it is something McAuliffe has long been concerned about — openly worrying in an interview with CNN in June, shortly before he won the commonwealth’s Democratic primary, that Trump’s potency could be waning.

Outside political groups working in Virginia, like Swing Left, a group that formed in the wake of Trump’s election in 2020, tell CNN that they have seen no drop off in engagement ahead of the off-year elections.

Ryan Quinn, the group’s campaigns director, said their affiliated organization Vote Forward, a group that sends letters directly to voters urging them to get out and vote, has seen four times as many letters written this year than in 2019 when the group was focused on legislative races in the commonwealth. And that Swing Left has made four times as many calls to voters in Virginia this year, too.

“While it was special that we were able to flip the state in 2019,” Quinn concluded, “this clearly has much greater national import going into the 2022 cycle.” 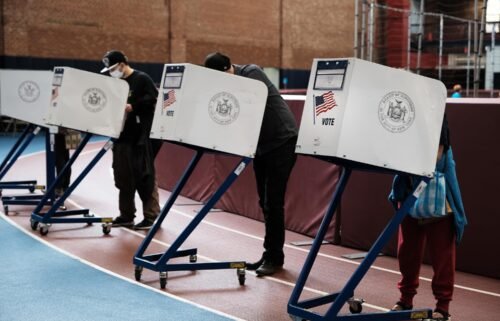