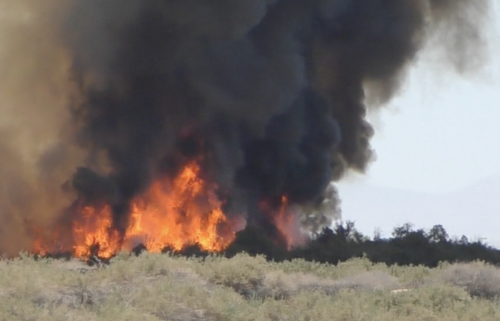 "I kind of fell into coaching the team last year due to distance learning," Hughes said. "We started kind of late and we were kind of thrown into a league where we took a beating last year."

A beating indeed as the Hornets were thrust into the Imperial Valley League where they finished 0-14. Their closest game was a 9-3 loss to Palo Verde in the final game of the season.

"The girls had such a great attitude," Hughes said. "I thought about it during the offseason and decided I gotta come back. We just have girls with great attitudes and that's the key this year."

That's what sports and teams will do to a person. They lure you back, not because of the wins and losses, but, as a coach, the players.

This past season the Hornets were removed from the IVL and placed in the new Desert League, comprised of four teams, Calexico, Imperial, Palo Verde and of course themselves. All four qualified this year for the CIF playoffs in different divisions. Calexico and Imperial in Division III, Palo Verde in Division IV and Calipatria in Division V.

"We had a tough league," Hughes said. "On the non-league schedule we did very well."

The Hornets finished the regular season 12-9 but 2-7 in Desert League play. League champion Calexico is currently the #3 seed in Division III, Imperial the #8 seed. Palo Verde claimed a #7 seed in Division IV and Calipatria a #5 seed in Division V. In the first two games of the CIF playoffs, the Hornets won both games and outscored their opponents 24-5.

It all starts with attitude, our girls were ready

The Hornets are lead by their workhorses, pitcher Emily Gamboa and catcher Kylie Lyerly. Gamboa's sister, Kimberly plays shortstop and fills in to pitch for her sister when needed. April Garcia is solid at first base.

"April, is a big fan of Eric Hosmer," Hughes said. "She tries to model her game after Eric Hosmer."

The Hornets have two juniors at second and third base, Luz Aguilar and Gigi Castro. Castro drove in all three runs in the Hornets first round 3-0 win over Mount Miguel.

In the outfield, Celine Zapata prowls in left, the rest are sophomores, all just learning the sport last year as freshman.

"A lot of them never played before," Hughes said. "They've advanced so much."

"The outfield has been shut 'em down if there is a fly ball," Hughes said.

On Saturday morning the young Hornets head to El Cajon to battle the #1 seed Foothills Christian Knights, 17-1 on the season.

"I'm thinking, if we win this game, we go straight to the semis and are kind of in the driver's seat," Hughes said. "Because somebody will have to beat us twice. I don't the girls, if we lose, we'll have to come back and beat somebody twice and that's always tough."

Hughes know it will come down to pitching and he hopes his horses will be ready when they leave the stables early Saturday morning.