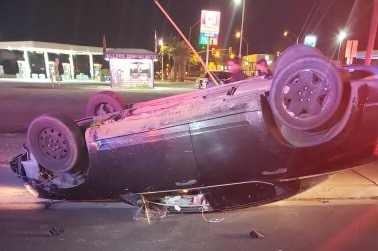 The Somerton Cocopah Fire Department responded to the intersection of Main Street and Musgrove Avenue around 1:30 a.m.

Crews found a black Sedan on its roof with the two occupants ejected from the car.

A 40-year-old female was complaining of head pain and was taken to the Yuma Regional Medical Center with non-life threatening injuries.