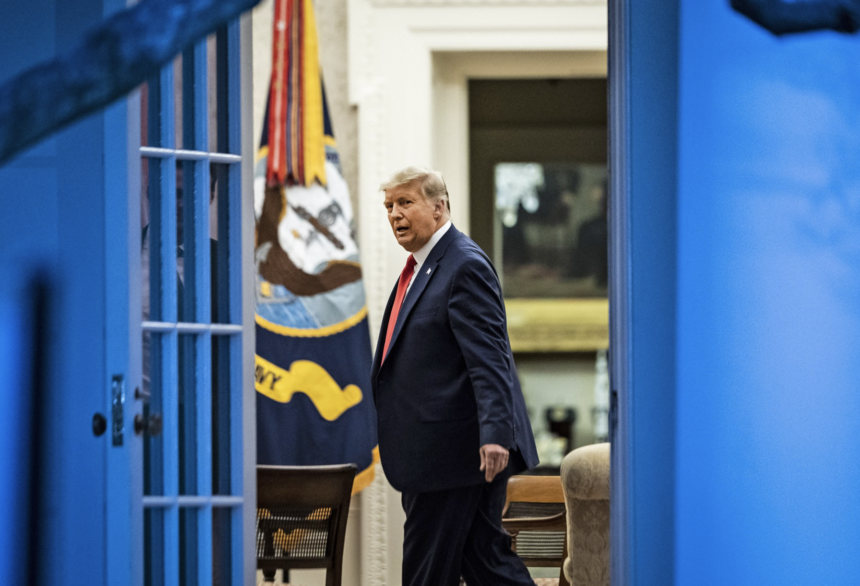 Some aides and allies are trying to persuade the president to begin making post-presidency plans.

WASHINGTON — President Donald Trump's allies are preparing for the end of his legal fight over the election results well into December, even as they continue to push him to accept a conclusion to his presidency and make post-White House plans.

"The legal challenges are continuing, but those close to the president, and frankly the president, understand they're futile," a senior administration official said.

While Trump has scarcely been seen since President-elect Joe Biden was projected as the winner more than a week ago, he has regularly continued to fire off tweets contending — without evidence — that he won the election and that it was stolen because of rampant fraud.

As a result, the transition of power appears to be in suspended animation. Trump and most of his staff continue to talk publicly as though he will remain in the White House for a second term. The Biden team is trying to launch a transition but without the official sanctioning that would allow it access to critical information and resources to smooth the handoff.

And while Trump's unrelenting use of Twitter to litigate the election in the court of public opinion draws minimal response from within his party, it has left some on the outside questioning his endgame: Could he keep fighting until the Jan. 20 inauguration — or later?

Trump's advisers are talking to him about what the end looks like — using the word "conclusion" rather than "concession." One off-ramp being recommended as a "conclusion" is that he admits that Biden will enter the White House on Jan. 20 while continuing to allege the results are questionable and simultaneously announces that he's running for president in 2024, a senior administration official said.

The Dec. 14 cutoff his allies point to is likely to be forced on Trump. The Electoral College formally votes that day, shortly after the states certify their results. Even if Trump holds out on accepting the results until then, there is hope inside the administration that he would greenlight some formal intelligence briefings for Biden before then, a senior administration official said.

Privately, some Republican senators have acknowledge that Biden will be the next president. But most are expected to stay quiet until the Electoral College votes, a Republican strategist said.

Until then, his campaign continues to engage in litigation. Trump's campaign announced Wednesday that it would pay $3 million for a partial recount in Wisconsin.

While many of Trump's allies admit it would take an extraordinary turn of events to reverse the outcome, they don't see Trump or his campaign letting up until every last legal effort has played out and results have been certified.

Within the White House, chief of staff Mark Meadows is said be among those trying to move Trump toward accepting that he will be leaving on Jan. 20, but Trump lawyer Rudy Giuliani continues to press Trump to keep the legal fights going, according to a person close to the White House.

"We're going to continue to explore all of the fraud and abuse that's been reported to us from the more than 11,000 credible tips we've received from our hotline and website," Trump campaign adviser Jason Miller said.

Trump has continued to promote baseless conspiracy theories about election fraud, trying to undercut the credibility of the election. There has been no evidence of widespread fraud, and NBC News has projected Biden to be the winner.

Those close to Trump have also been trying to move his attention to his post-presidency plans, talking about a potential run in 2024 and starting his own media venture. There has been hope that Trump would quietly accept the results by the end of the week and allow the formal transition process to begin. But a public pronouncement isn't expected to come until later.

Trump has also been talking about a potential media partnership, perhaps with the conservative news channel OANN or Newsmax, a person close to him said.

"He wants to make money, but more than that he wants attention," an ally said.