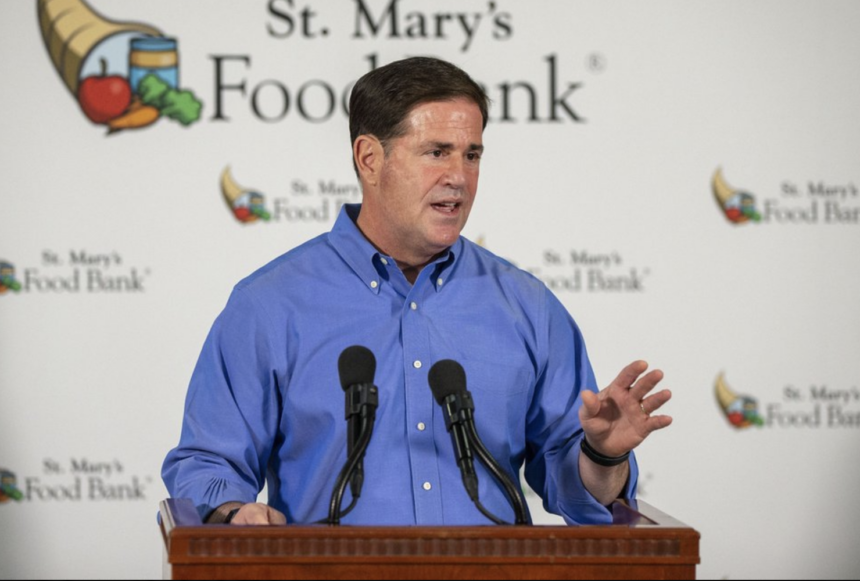 PHOENIX (AP) — Arizona Gov. Doug Ducey on Thursday warned that a “storm is ahead” as coronavirus cases climb in the state, but defended new guidelines for in-person school instruction that will let students remain in class far beyond what earlier guidance would have recommended.

The Republican governor insisted that his administration consulted with public education and health officials before making the decision to ease guidance for when schools should consider ending in-person instruction and returning to online classes.

But Superintendent of Public Instruction Kathy Hoffman, a Democrat, said in a tweet that her department did not request or recommend any changes to the state health department’s guidance.

And two major school administrator groups objected to the decision, saying it goes against months of planning done following the previous guidance. The Arizona School Administrators and the Arizona School Boards Association released a statement s aying the change was made without communicating its reason or an understanding of its impact on schools.

Ritchie Taylor, Hoffman’s spokesman, said the Health Services Department presented the change as a done deal at a regular weekly meeting earlier this month of a group of county health officials and Education Department officials. The group has been meeting since the summer to collaborate on school virus issues.

“It was not put up for a collaborative debate or input,” Taylor said. “It was put up as a policy decision.”

The Health Services Department in August issued guidance outlining how and when schools can consider reopening and when they should close again if virus cases surge. Those rules suggested a return to remote learning if at least one of a county’s three benchmarks based on COVID-19 cases, testing positivity and prevalence of COVID-19-like illness moved from moderate to substantial spread.

The new recommendations were quietly posted on the health services department website last Thursday, and went unnoticed until KNXV-TV reported on them earlier this week. They call for districts to move to remote learning when all three benchmarks move to substantial spread for two weeks.

Ducey on Wednesday dodged questions about why there was no announcement of the change and did not specifically say who requested them. The guidance covers 1.1 million public school students in district and charter schools statewide. It doesn’t cover private or parochial schools.

“These guidelines were adjusted at the request of public education leaders in coordination with public health officials,” Ducey said. “And that’s how we’ll continue to do that and we will be completely transparent.”

The governor spoke at a media briefing where he discussed current virus conditions, which he said were rising. Health Services Director Dr. Cara Christ said she expects a further spike in cases after Thanksgiving, when college students return home and families gather for the holidays.

“I hope that I am wrong, but what I would anticipate is to see a spike about 10 to 14 days after Thanksgiving and then potentially continue to increase over the next four to six weeks,” Christ said.

That would strain hospitals, who will also be dealing with normal seasonal flu cases and higher patient counts as winter visitors return to Arizona.

Christ’s department on Thursday reported over 1,300 additional known COVID-19 cases as seven-day rolling averages for new cases, new deaths and testing positivity all rose over the past two weeks as the coronavirus outbreak continued to increase.

The agency reported 1,315 additional cases and 13 additional deaths, increasing the state’s totals to 242,480 cases and 5,918 deaths. The number of infections is thought to be far higher because many people have not been tested, and studies suggest people can be infected with the virus without feeling sick.

According to Johns Hopkins University data analyzed by The Associated Press, Arizona’s seven-day rolling average of daily new cases rose from 728 per day on Oct. 14 to 1,036 on Wednesday while the average for daily deaths increased from 6 to 7.3 and the positivity average went from 7.2% to 9.8%.

Arizona was a national hot spot in June and July but COVID-19 cases and related hospitalizations then fell off before starting to gradually increase again in September. Cases and hospitalization rates remain far below summer highs.

“Thank you to Arizonans for weathering the storm to date,” he said. “We know that there is a storm ahead of us yet its not here.”

For most people, the new coronavirus causes mild or moderate symptoms, such as fever and cough that clear up in two to three weeks. For some, especially older adults and people with existing health problems, it can cause more severe illness, including pneumonia and death. The vast majority of people recover.