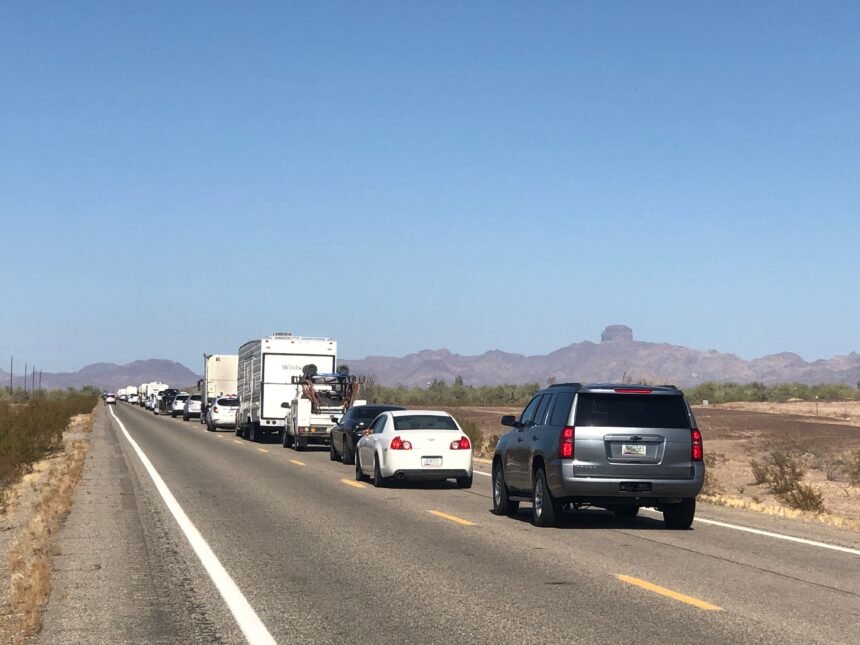 Traffic stopped for hours while law enforcement searched for suspects

The Yuma County Sheriff's Office (YCSO) tells KYMA.com it started around 2:30 with a roadside confrontation around mile marker 41. YCSO says a man and a woman in one car, got into some sort of dispute with a man in another car.

Deputies say the man in the first car displayed a gun and fired off one shot. They say it's unclear if he was actually firing at the other vehicle. However, deputies say it appears the woman took his car and left him on the highway.

Deputies say both cars continued northbound on 95 to mile marker 53, where they turned into a wash. They say the drivers then abandoned both vehicles.

The man left on the highway was later located in Quartzsite. Arizona state troopers tracked down the couple as well. YCSO is now interviewing all three.

No one got hurt during the incident, but it did shut down Highway 95 for hours while the The Arizona Department of Public Service (DPS), U.S. Border Patrol, and YPG Police conducted a search for the individuals involved.

YPG employees were forced to shelter-in-place due to the highway closure. Operations at the base resumed as normal just before 6:30 Thursday evening.

YCSO has taken over the investigation into the incident. We will provide an update on this developing story when deputies release more information.

"Initial reports indicate that none of the people involved in this incident were employed by Yuma Proving Ground. We are so thankful for our local, state, and federal law enforcement personnel for performing their mission."

The Arizona Department of Public Service (DPS), U.S. Border Patrol, and YPG Police continue to search for the suspects.

KYMA.com will continue to follow this story, and bring you updates as they become available.

YUMA, Ariz. (KYMA, KECY) - A number of law enforcement agencies are responding to reports of shots fired along U.S. 95 near Yuma Proving Ground.

The Arizona Department of Public Safety said details are limited, but confirmed the shots fired call may be tied to a domestic violence incident on Yuma Proving Ground property.

DPS said no one was injured, but a woman is in custody. Law enforcement set up a perimeter as they look for a male suspect.

Currently traffic in both directions is shut down while the Arizona Department of Public Service (DPS), U.S. Border Patrol, and YPG Police search for suspects.

There are reports of two or three suspicious unauthorized persons last seen in a remote part of a YPG range. All...