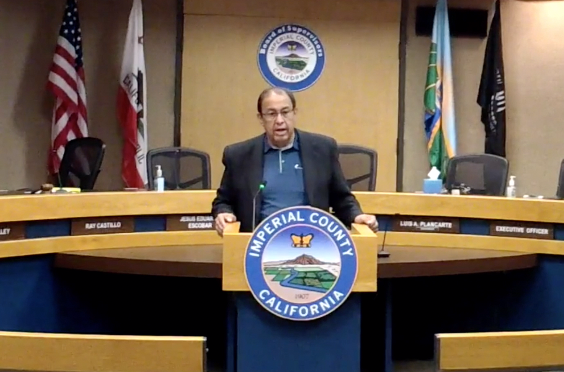 “The positivity rate over a 14 day period is approaching 23%," said Newsom.

The governor says the increasing COVID-19 number and the overwhelmed hospitals in Imperial County are a grave concern.

“We have now had over 500 individuals transferred out of the hospital system in Imperial County just over the last 5 weeks," said Newsom.

In a span of 14 days, 30 people from the valley have died from the virus.

The governor says if action isn’t taken he will intervene.

“They will move at their discretion. If they are not able to come to their consensus I am committed to intervening as it is my role and responsibility," said Newsom.

The Board of Supervisors held an emergency meeting in regards to the governor's comments, although the governor recommends taking a step back the county has decided to remain in stage two lower risk allowing for retail stores to remain open.

“At this point, there is no decision to make any changes yet. I think over the next few days we will be working with representatives from the governor's office and seeing what the best path is going forward is," said Luis Plancarte, BOS Chairman.

The county’s stay at home order and facial covering requirement in public places remains in effect for valley residents.

We spoke to a local business owner who says the possibility of closing up again could be deadly for the livelihoods of many business owners.

“It is really gonna affect a lot of local businesses. Unfortunately, we gotta pay our normal taxes, we gotta pay everything, and our bills keep on coming," said Alex Quintero, store owner.

"I don't know how much more they can intervene if the county is doing what they should be doing, I'm sure you cant weed out everybody, but most of the residents here are doing what they can," said Frank Acedes, El Centro resident.