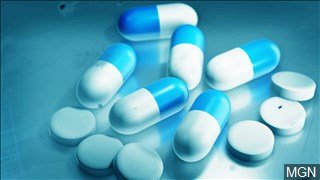 “The way the pills affect our brain is both physiological and psychological and it can be life threatening and that's why the use of the this medication is so problematic," that’s according to Dr. Bharat Magu, Chief Medical Officer at the Yuma Regional Medical center.

According to U.S Customs and Border Protection reports show more than 96,000 pounds of drugs confiscated in the state of Arizona.

Recently, the Arizona legislature passed the proposed Arizona opioid epidemic act  implemented by Governor Doug Ducey. It received unanimous support in the house and senate. Here are a few items on the plan to fight against the epidemic:

-Have physicians place a 5-day limit on initial opioid prescriptions.

-Fund $10 million dollars that will go on to providing treatment for uninsured or underinsured Arizonans.

-And to increase the access to Naloxone, which is an emergency treatment that can help reverse an overdose.

Mayor Doug Nicholls is concerned of any sort of drug increase.

He believes education is a major factor into combating the increased use of opioids. His message to the community says,

"We have our resource officers in the schools and that's really key to try to get in early to set the tone....The long range plan is really more of an education to try to deter people from ever getting there.”