Earlier this year tensions between ABC News anchors George Stephanopoulos and David Muir boiled over to the point that Stephanopoulos threatened to walk to a rival network, according to sources close to the matter.

In an unusual intervention, Disney executive chairman Bob Iger flew across the country to broker peace at ABC News.

“They found a way to have two big stars and build towards the future,” one of the sources said.

But not without a whole lot of drama along the way. The previously unreported spat showcases the challenges of talent management and how TV anchor roles are evolving in the streaming age.

Spokespeople for ABC News, a unit of Disney, declined to comment for this story. More than half a dozen sources spoke to CNN Business on condition of anonymity.

At issue was a title, “chief anchor,” and a key network news responsibility: leading special coverage of breaking news stories and special events.

Those special reports have been helmed by Stephanopoulos for the better part of a decade. Now Muir will have that responsibility on top of his “World News Tonight” anchor role.

Stephanopoulos, the co-anchor of “GMA” on weekdays and “This Week” on Sundays, will be adding a production company and prime time specials to his portfolio. Sources said that he will create new shows for Disney-owned platforms like Hulu and National Geographic.

Now, no one at ABC News will have the title of “chief anchor.”

The title was invented in 2014, and that’s really where this story begins.

Diane Sawyer was stepping down from “World News,” the network’s flagship evening broadcast, historically the top job at ABC News.

Stephanopoulos was anchoring “GMA” and was, according to some sources, coveting the “World News” chair.

But power was shifting from the evenings to the mornings. As Bill Carter wrote for The New York Times in 2014, “Stephanopoulos is now too important a part of ABC’s top-rated morning program, ‘Good Morning America’ — by far the biggest profit center for the news division — to be moved to the evenings.”

Muir was promoted to replace Sawyer at 6:30 p.m. instead.

But Sawyer’s special report responsibilities were handed off to Stephanopoulos, the more seasoned and politically knowledgeable anchor, who famously worked in Bill Clinton’s White House before joining ABC. That’s how the “chief anchor” title was born.

Inside ABC News, tensions between Muir and Stephanopoulos were an open secret, with each camp blaming the other. But the TV news industry is never lacking in egos and rivalries, and ABC clearly valued both men.

“This was always going to blow up at some point,” one of the sources said.

And Stephanopoulos won accolades for anchoring elections, inaugurations, and a pair of impeachments.

But ABC management eventually decided that Muir should be tasked with special reports.

Depending on who’s telling the story, either “David hated being sidelined until 6:30,” as one source put it, and pushed for the added role during a contract negotiation; or, in the words of another person close to him, “ABC asked him to step up.”

Either way, it happened about two years ago, when Muir quietly signed a long-term contract.

ABC management “asked for his patience” — in other words, asked him to respect that Stephanopoulos would continue leading big event coverage through the 2020 election — “and he’s done just that,” a network source said.

Along the way Stephanopoulos agreed to give up the “chief anchor” title but, according to sources, was under the impression that no one else would have that exact role.

When Stephanopoulos learned that Muir would be “chief anchor” in spirit, though not in title, he felt deceived by ABC News president James Goldston, three sources said.

At the time, Goldston had yet to announce that he was stepping down from the news division. Some inside ABC News believed he was weakened by the July 2020 ouster of his longtime deputy Barbara Fedida, the powerful head of talent and business at the news division.

Fedida departed after an investigation confirmed a news report that she made what Disney called “unacceptable racially insensitive comments.” (Fedida called the allegations “heartbreaking and incredibly misleading.”)

Now Goldston had a talent mess on his hands, and “Disney doesn’t like messes,” in the words of one longtime executive.

Such messes sometimes flow uphill instead of downhill. Goldston’s boss Peter Rice, Disney’s chairman of general entertainment content, was involved in the delicate maneuverings. According to three sources, Stephanopoulos ultimately went all the way to the top of the company, to Iger, with whom he has had a longstanding relationship.

Faced with the possibility that Stephanopoulos would allege breach of contract, and then walk out the door to one of ABC’s competitors, Rice and Iger flew to New York to work out a solution.

Muir’s deal was intact and wasn’t changing. Muir continues to be positioned as the face of the news division. And his ratings on “World News Tonight” continue to be a source of pride for ABC management. The broadcast often ranks as the most popular single program on all of American television.

So Muir will still lead special events coverage going forward. In fact, he did so on February 22, when President Biden held a memorial ceremony to honor Covid-19 victims.

“The other 6:30 p.m. anchors lead special events coverage, so this is a natural evolution,” one network source observed.

Stephanopoulos will likely lead breaking news coverage when it occurs in the morning, before or after “GMA,” sources said.

More importantly for Stephanopoulos, he received a contract extension and, according to two of the sources, a significant pay bump.

ABC will set up a production company for Stephanopoulos, who will work on projects along with his wife Ali Wentworth, an actress and comedian. Those projects could wind up all across Disney, especially on streaming platforms, the company’s top priority.

“This was a deal he jumped at,” a source close to him said. “This is a way to build to the future.” 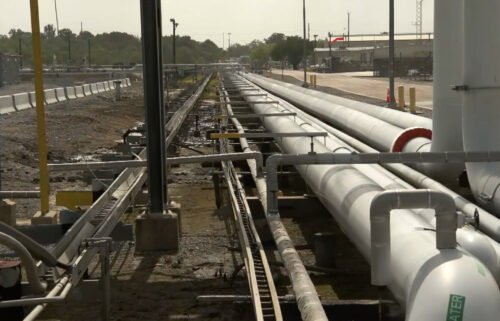