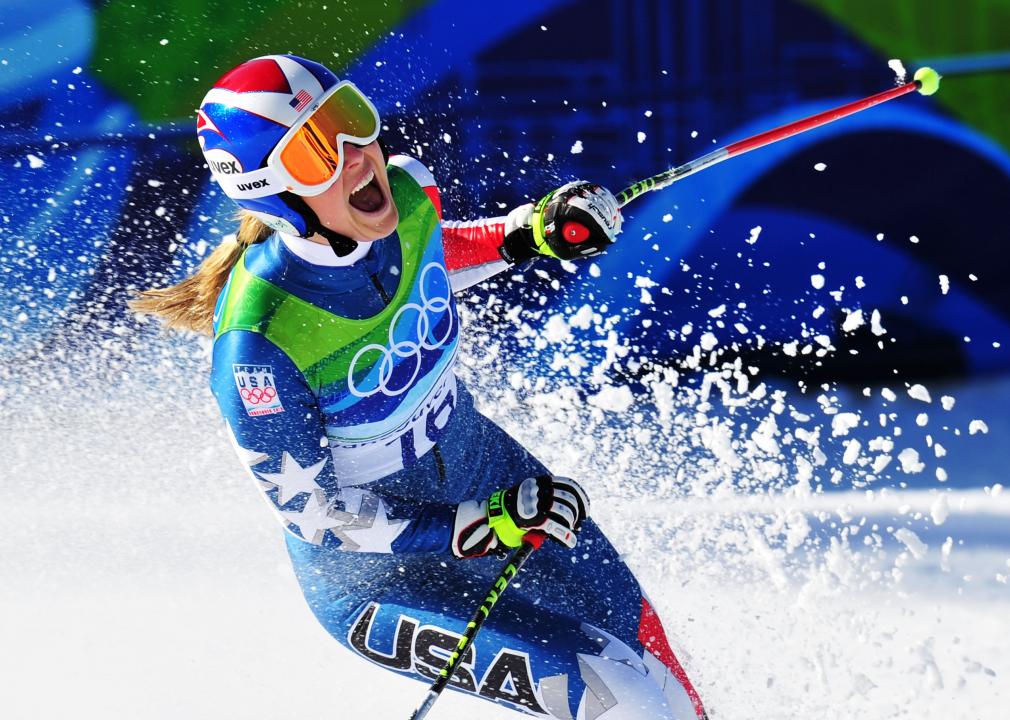 The ​​first Winter Olympics was held in 1924 and has since served as fodder for some of the most memorable and inspired moments in sporting history. With the opening ceremonies for the 2022 Beijing Olympics coming Feb. 4, Curated looked back at 13 of the greatest ski moments in Olympic history.

Skiing has, in one form or another, been part of the Winter Games since that first installment. There are six current International Ski Federation (FIS) disciplines in the Winter Olympics: alpine skiing, cross-country skiing, ski jumping, Nordic combined, freestyle skiing, and snowboarding.

The 2022 Winter Olympics will be the first since 1998 to go on without Lindsay Vonn, arguably the best woman ski racer in history. Vonn retired in 2019 after three Winter Olympic medals, eight world championship medals, and 82 race wins throughout her tenure. She also scored two World Cup titles, four overall World Cup victories, and 16 Crystal Globes.

The upcoming Winter Olympics are also beleaguered, with the U.K. and Canada the latest in a string of countries (that includes the U.S.) to announce a diplomatic boycott of the games due to alleged human rights abuses in China. Beijing officials have vehemently denied the claims. The upcoming Olympics will feature seven new events, including Men’s and Women’s Big Air (Freestyle Skiing) and Mixed Team Ski Jumping.

Keep reading to discover some of the top Olympic ski moments since 1924. 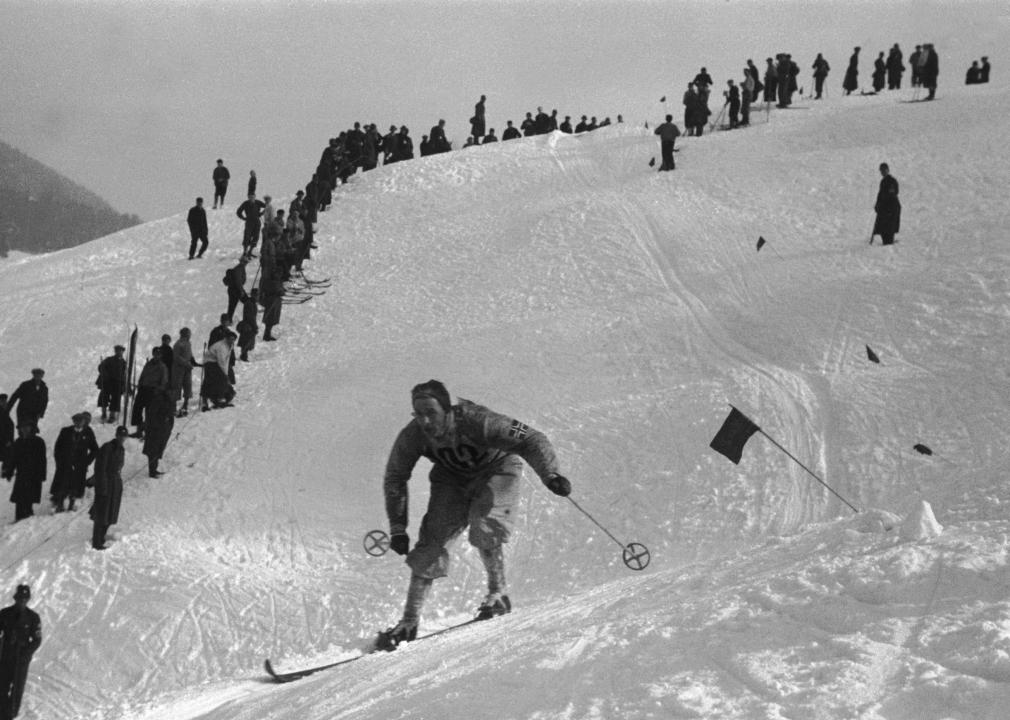 Alpine skiing made its Olympic debut in men’s and women’s combined at the 1936 Berlin Games. It came six years after the FIS first recognized downhill ski racing as a sport. The governing body founded in 1924 initially only recognized Nordic events of cross-country skiing.

Sir Arnold Lunn, a British skier who created slalom by putting gates (paired poles for the skier to pass through) on the course, is responsible for successfully lobbying the FIS in 1930 to officially recognize competition in alpine skiing and slalom. He also assisted with the 1936 games at Garmisch-Partenkirchen. 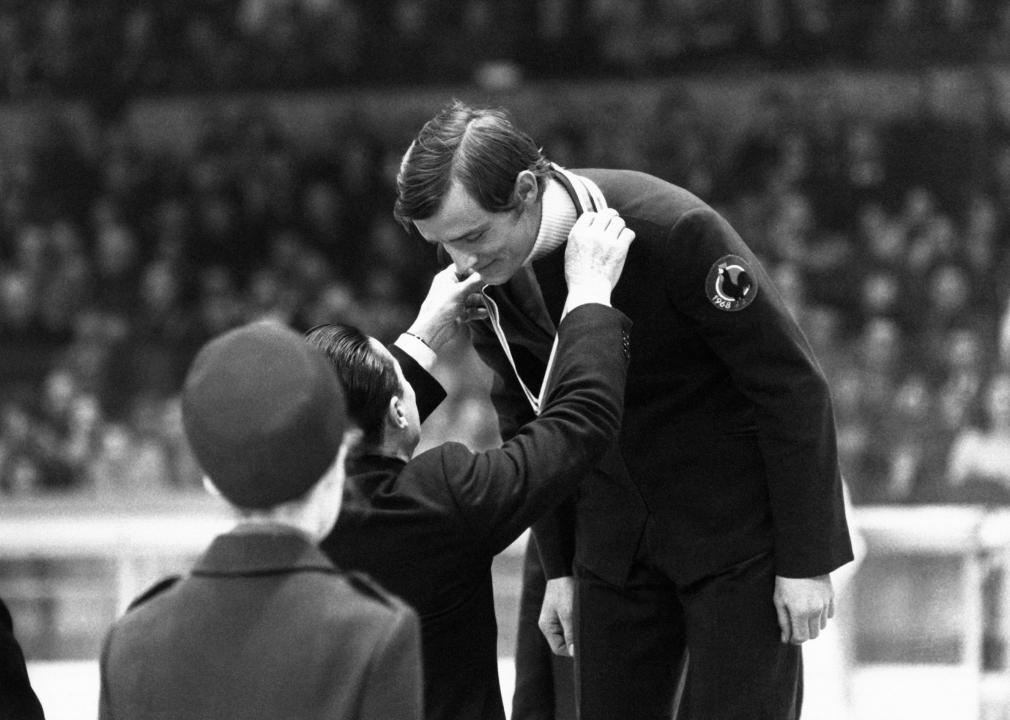 The “Killympics” weren’t so-named for a travesty, but rather for a gold medal sweep by French alpine star Jean-Claude Killy.

Killy, then 24, won the downhill by .08 seconds despite accidentally stripping his skis of wax on a practice run, and he handily won the giant slalom. The slalom, his third event, was held in thick fog and Austria’s Karl Schranz, who had the fastest time, was disqualified by a race jury for missing gates before a soldier interfered.

Killy’s international career ended after 1967-68, and he went to the U.S. where he took endorsement deals, starred on TV, attempted a race car career, and eventually joined the FIS skiing board. He served as co-president of the 1992 Olympics in France and worked on the Olympic Committee. 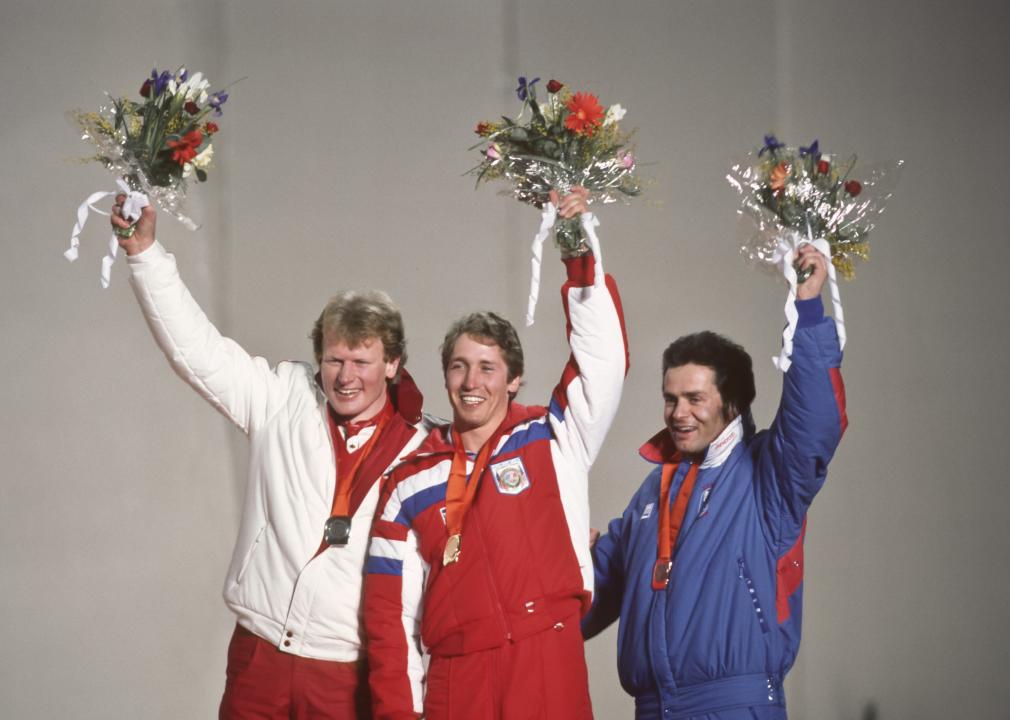 Bill Johnson became a national hero when he won an Olympic gold medal in downhill skiing at the 1984 Games in Sarajevo, Yugoslavia, after nearly 50 years of European domination in the sport.

Johnson grew up in Oregon and was frequently in trouble as a child. When he was arrested for stealing a car, a judge told him he had two choices: jail or attend ski school. At 23, he became the first American man to win a World Cup downhill event. Immediately following that win, he predicted he’d win gold at the Olympic Games the next month. He did, besting favorite Peter Muller by .27 seconds.

It was the only Olympic event of Johnson’s career. Categorized as a partier, he was left off the next cycle’s team. He suffered a bad crash while attempting a comeback for the 2002 Olympics in Salt Lake City and died in 2016 at 55 years old. 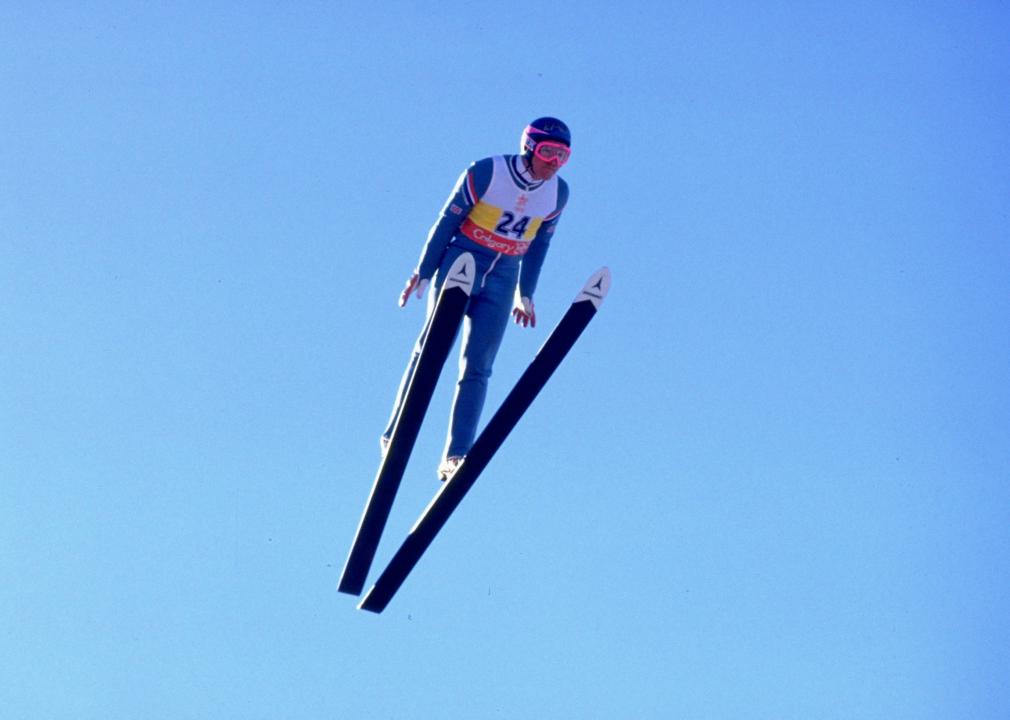 Michael Edwards is still looked at as the embodiment of the Olympic spirit, in which everyday people dream of participating in the games even if they didn’t train a lifetime for it. Edwards, who carved a career as a plasterer, was the first Olympic ski jumper for Britain and finished last in both the 70-meter and 90-meter at the 1988 Calgary Winter Olympics.

Yet, the persona and demeanor of “Eddie the Eagle” led him to become an overnight favorite with viewers. Broadcasters boasted, “the eagle has landed,” when his layers of socks in hand-me-down skis came back to the snow.

The IOC instituted what’s colloquially called the “Eddie the Eagle rule” to make it almost impossible for amateurs to qualify for the Olympics. His story still lives on in a 2016 eponymous movie starring Taron Egerton and Hugh Jackman. 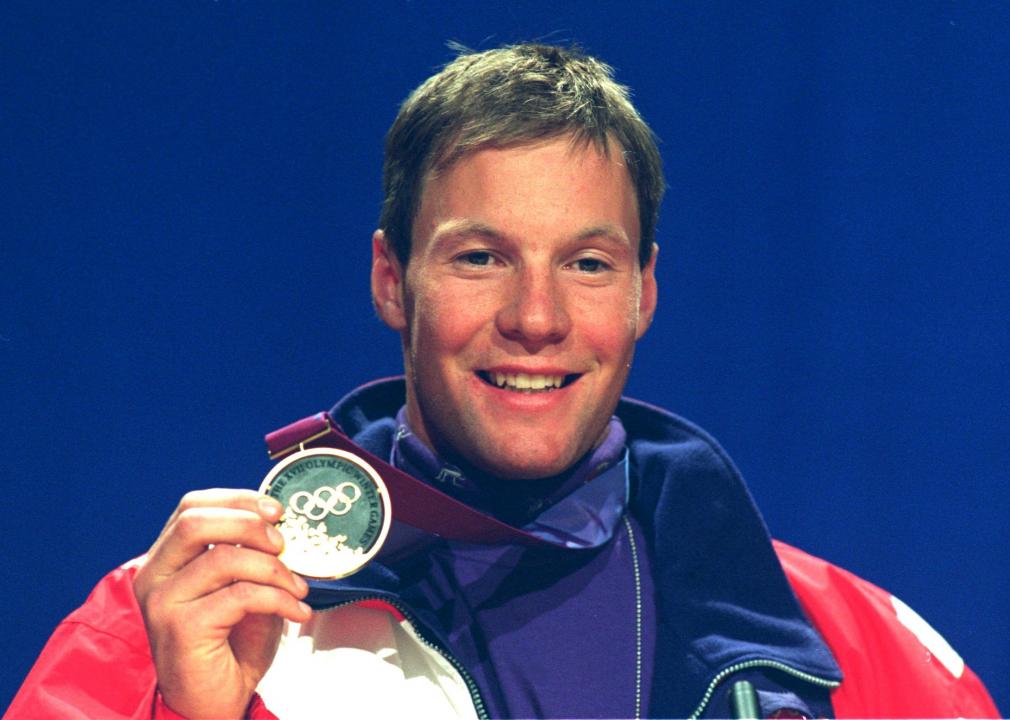 To say Tommy Moe was a longshot to medal is an understatement. Moe entered the 1994 Olympics in Lillehammer, Norway, having never won a World Cup race and finishing bottom of the pack at the 1992 Olympics.

He won gold in the downhill while his native Alaskan neighbors were sleeping and days later, on his 24th birthday, won silver in the super-G. The second medal made him the first American skier to win two medals, landing him on the cover of Sports Illustrated and the late-night TVs of David Letterman viewers. Over his tenure, Moe became a three-time Olympian between 1992 and 1998.

The Super-G was his only career World Cup victory. Moe was inducted into the U.S. Ski Hall of Fame in 2003. 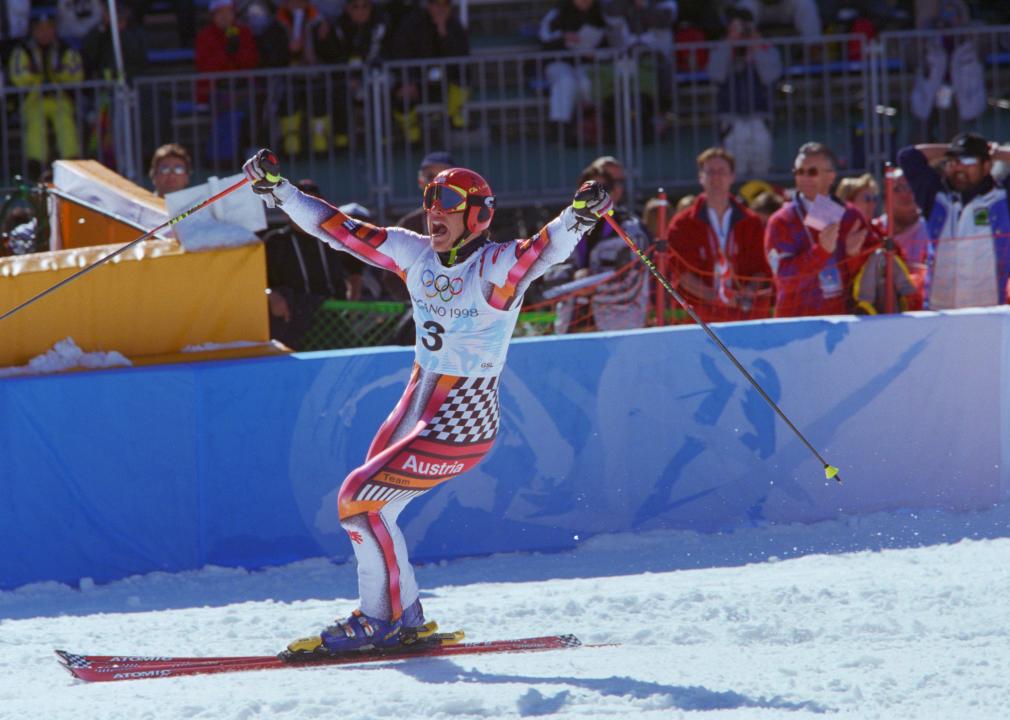 Austrian Hermann Maier shocked the world at the 1998 Nagano Olympics when he came back to compete after a harrowing downhill crash that sent him through three safety nets at an estimated 80 m.p.h. Maier avoided serious injury and days later won gold medals in the slalom and super-G events.

Maier was called “The Herminator” by fellow Austrian Arnold Schwarzenegger and continued on to dominate the World Cup circuit. His 13 race victories in the 2000-01 season tied the single-season record set by Sweden’s Ingemar Stenmark.

Maier was unable to compete at the 2002 Salt Lake City Olympics after a motorcycle crash but secured silver and bronze at 2006 Turin. He finished his career with six World Championship medals and 54 World Cup wins, third on the men’s all-time list. 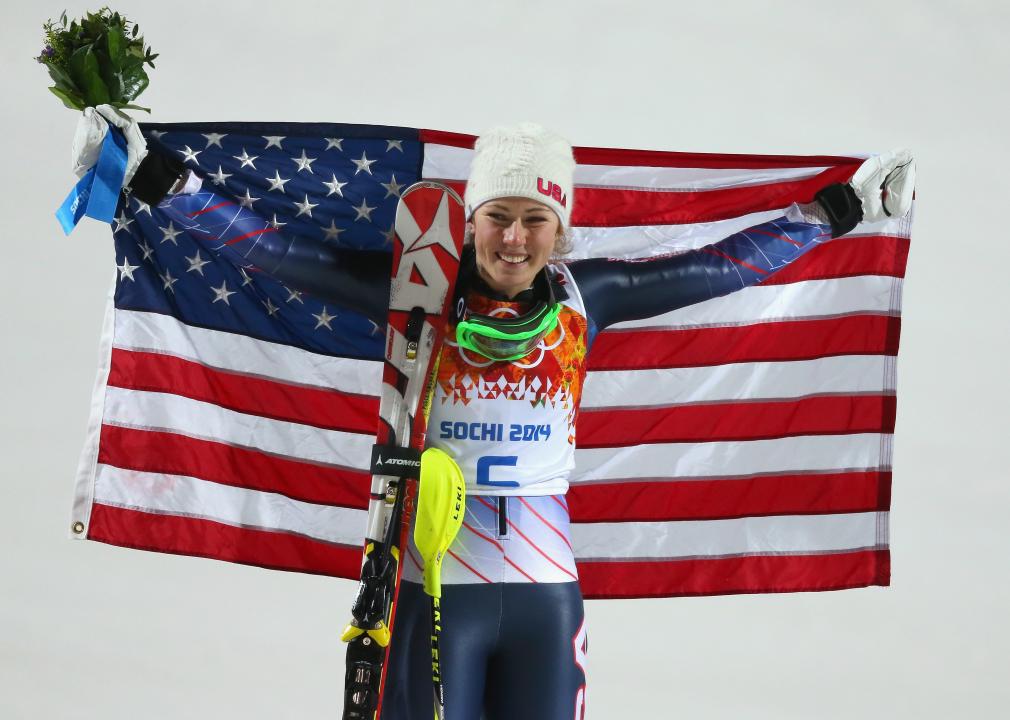 Mikaela Shiffrin turned into a household name in 2014 when she became the youngest Olympic slalom gold medalist in either the men’s or women’s discipline. Shiffrin was 18 years, 345 days when she raced in Sochi. It was the first U.S. gold in women’s slalom since 1972, a 42-year skid.

Shiffrin added a giant slalom gold and combined silver at the 2018 games and is one of the best American skiers to take the mountain. The six-time world champion is the most decorated American in World Ski Championships history and continues to knock down records on the circuit. In the same Olympics as Mikaela Shiffrin, Bode Miller took to the podium as the oldest Olympic medalist in alpine skiing history. Miller was 36 years old when he won bronze in the super-G. It was his sixth Olympic medal—more than any other male American skier in history—over five games in which he competed. 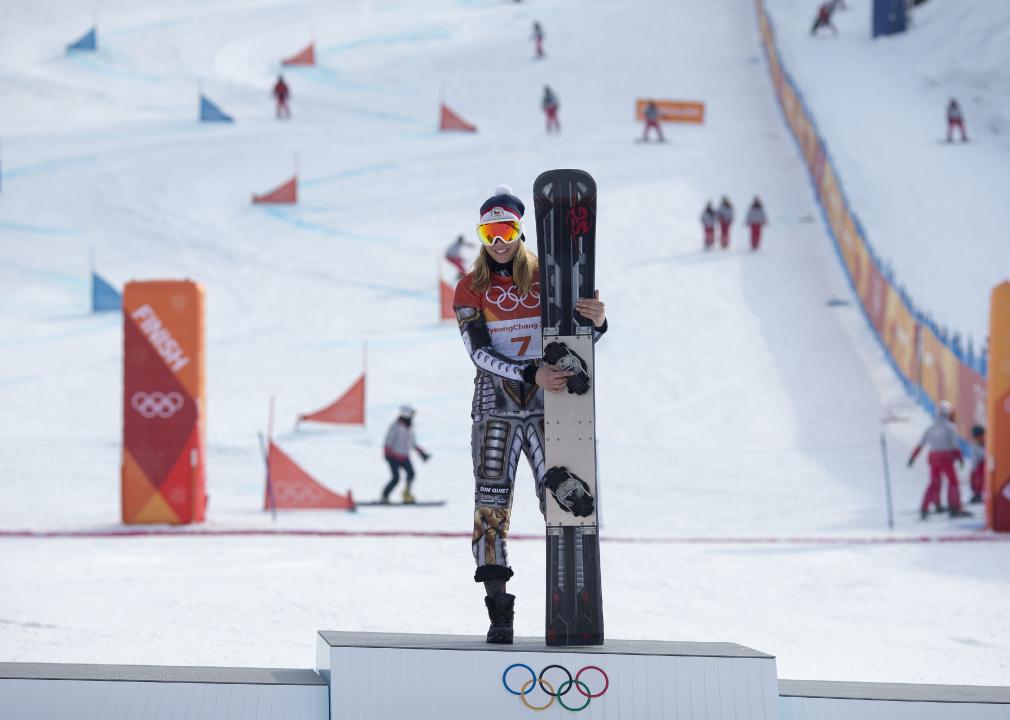 The Czech star, then 22, was a favorite in the snowboard parallel giant slalom. But she came into the Super-G race ranked 43rd without ever podiuming at an international ski event. Ledecka upset defending champion Anna Veith of Austria by 0.01 seconds and upon seeing her name at the top of the scoreboard asked a cameraman, “how did that happen?”

Watch for Ledecka to compete in both events again in Beijing this coming February. Freeski big air is one of seven sports making their debut at the Olympics this winter. The event is popular at the X Games and joins its brother, snowboarding big air, which made its debut in 2018.

In freeski big air, competitors go down a nearly 60-foot tall ramp that transitions into a short lip. They are awarded points for attributes of the trick they perform on the jump, such as the number of rotations, flips, grabs, and total time in the air.

Anastasia Tatalina of Russia and Oliver Magnusson of Sweden enter the Beijing games in February as the respective women’s and men’s reigning world champions. 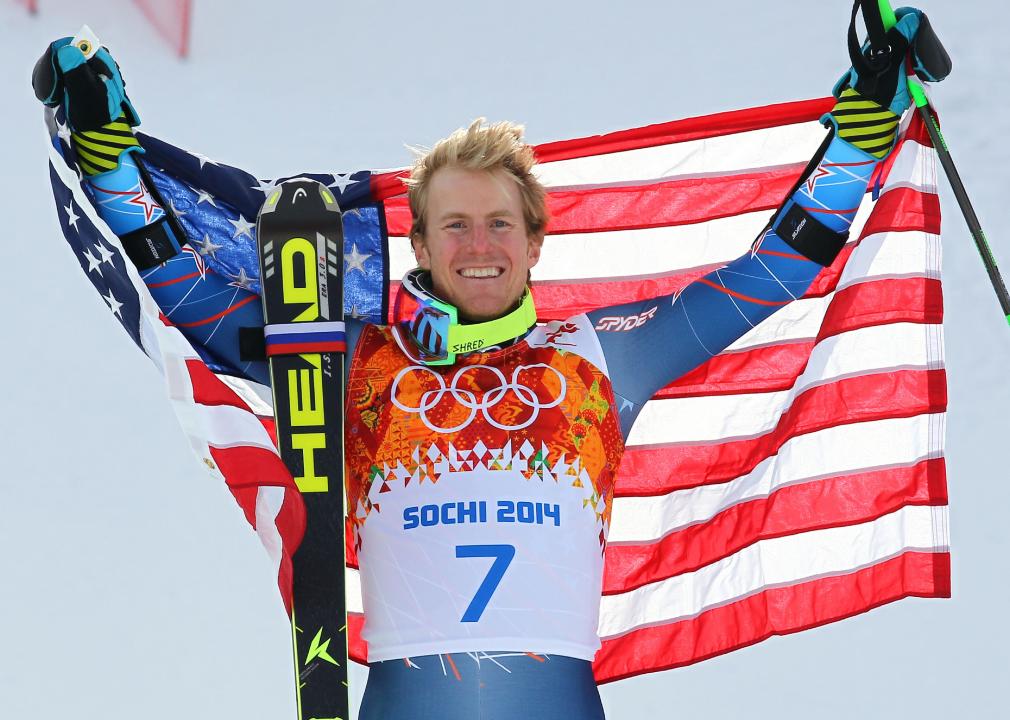 Ted Ligety dominated the men’s alpine ski circuit from the time he joined the U.S. Ski Development team all the way up to his retirement last February. Ligety broke into the national lexicon at the 2006 Turin Olympics when he came from 32nd place to defeat Bode Miller in the combined event. At 21, he became the youngest American man to win Olympic gold in the sport.

The four-time Olympian added gold in the giant slalom at the 2014 Sochi games, making him one of three American skiers (along with Mikaela Shiffrin and Andrea Mead Lawrence) to win two Olympic Alpine races. Injuries marred the end of his career, and he retired with 25 World Cup victories. Picabo Street fittingly grew up in Triumph, Idaho, and went on to become one of the most dominant speed skiers of the 1990s.

Street won an unexpected silver in the downhill at her first Olympics in Lillehammer and followed it by becoming the first American to win a World Cup title.

In the lead-up to the 1998 Nagano Olympics, Street tore her ACL and crashed into a fence in her final pre-Olympic competition. Still, she accomplished gold in the Super-G event by 0.1 seconds despite having never won a World Cup race in the event.

She attempted to become the first U.S. skier to medal in three consecutive Olympics, but fell short at the 2002 games in her home country and called it a career. 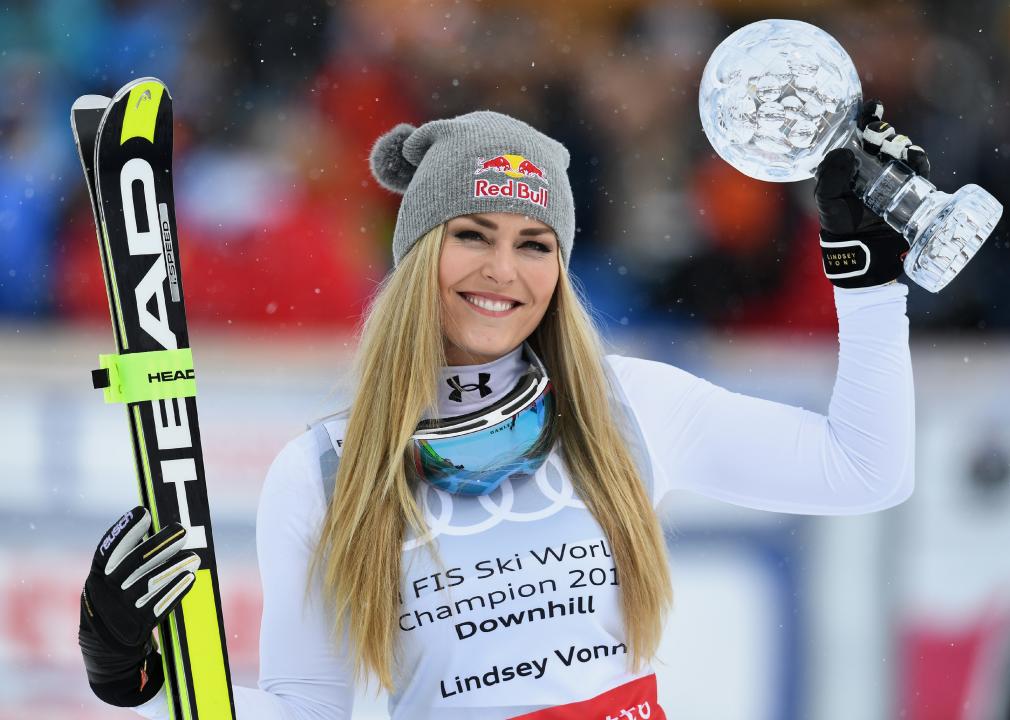 Lindsey Vonn, a four-time Olympian, retired from competition in February of 2019 as the most-decorated woman ski racer in the world.

Vonn became the first American woman to win gold in the Olympic downhill event in 2010. That same Vancouver games, she added a bronze in the Super-G and four years later at PyeongChang won bronze in the downhill.

Vonn’s 82 World Cup victories are the most of any woman in history and trail only Ingemar Stenmark’s 86 wins. Vonn continuously fought through injuries, particularly to her knee, throughout her career and ultimately cited it as a reason to retire. She is easily one of the most popular American skiers and has remained involved with the U.S. team ahead of the Beijing Olympics.

This story originally appeared on Curated
and was produced and distributed in partnership with Stacker Studio.