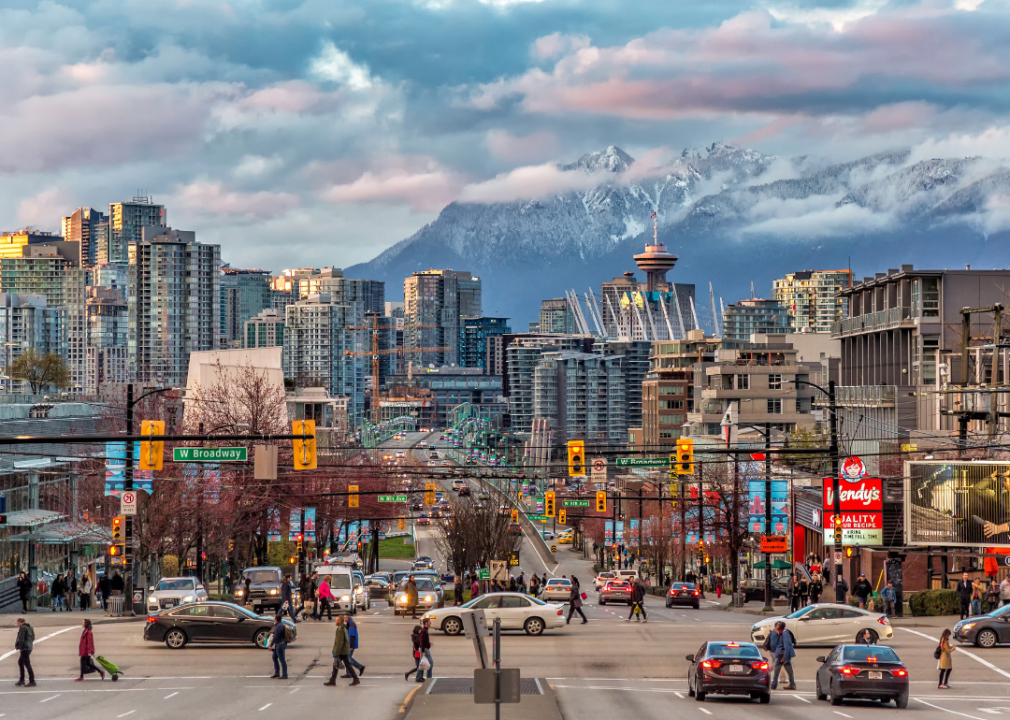 Filming locations from the best comedies shot in Vancouver

The Vancouver skyline with a mountain in the background

Vancouver, British Columbia, has the honor of being the third-largest production center for film and television in North America. As of 2020, the city has seen an annual budget of around $3.4 billion spent on media production, so it’s no surprise that it produces more than 65 movies and 55 television series per year. Given these statistics, Vancouver has created content in just about every genre imaginable.

Action fans have “Hollywood North” to thank for “Mission Impossible: Rogue Nation,” “Man of Steel,” and “The A-Team.” Horror fans can be suitably impressed with the city’s output of “Final Destination,” “The Predator,” and—for horror-comedy buffs—the first four films of the “Scary Movie” franchise. That said, the seaport city’s foray into pure comedy has given the world some of the funniest and most well-regarded movies of the last 25 years.

With a film history dating back to the early 1900s, it’s no wonder Vancouver has a vast number of comedies to its credit. The comedic spectrum spans from a blockbuster hit like “Hot Tub Time Machine” to an indie darling like “Juno.” Giggster looked at noteworthy shooting locations from the very best comedies shot in Vancouver that film fans can visit. To qualify as one of the best, the film had to have at least a 7.0 user rating on IMDb. 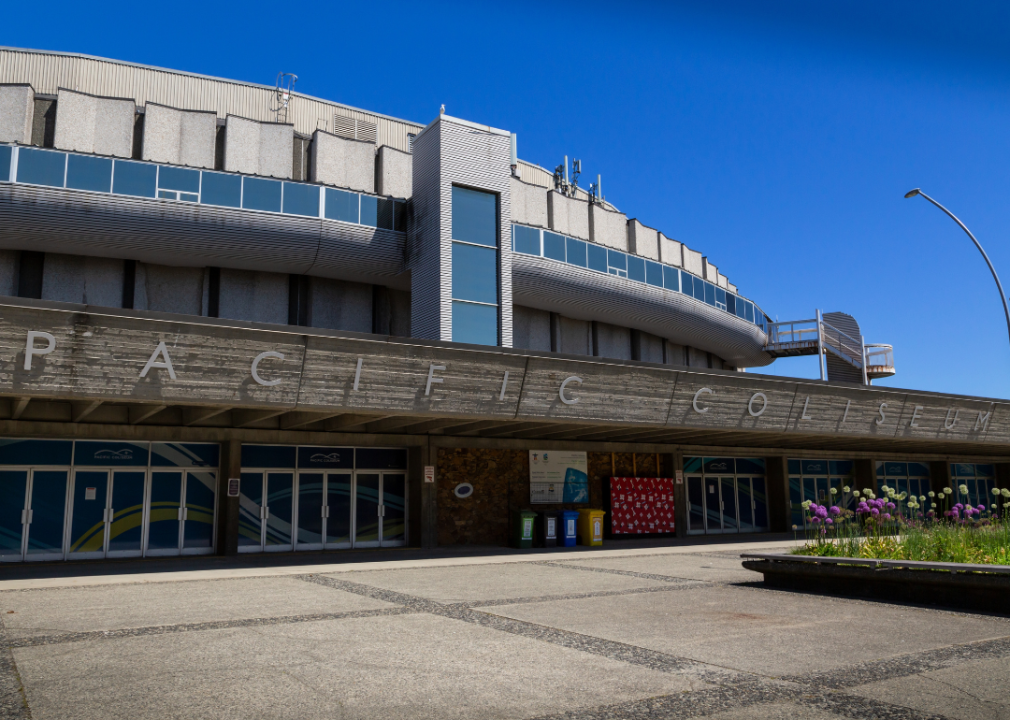 The competition stadium in ‘Best in Show’

The exterior of Pacific Coliseum

“Best in Show” is a staple of the comedy mockumentary genre and the brainchild of Eugene Levy (“Schitt’s Creek”) and Christopher Guest (“This Is Spinal Tap”). The film centers around five kooky contestants who do whatever it takes to win at the esteemed Mayflower Kennel Club Dog Show. The high-stakes climax of the film occurs in the Mayflower’s Competition Stadium, where Winky the Norwich terrier, played by Urchin’s Bryllo—yes, the dog gets its own credit—takes first prize.

This stadium is actually Vancouver’s Pacific Coliseum, a massive venue spanning 80,000 square feet and hosting everything from traditional sporting events, including skating competitions for the 2010 Olympics to circuses and trade shows. The Coliseum is located in Hastings Park, a massive urban park in the northeast portion of the city, which also features Vancouver’s Playland amusement park and Hastings Racecourse for horse racing. Many other movies and shows have filmed at this particular location, including “Cats and Dogs,” “Miracle,” “Supergirl,” and “Arrow.” 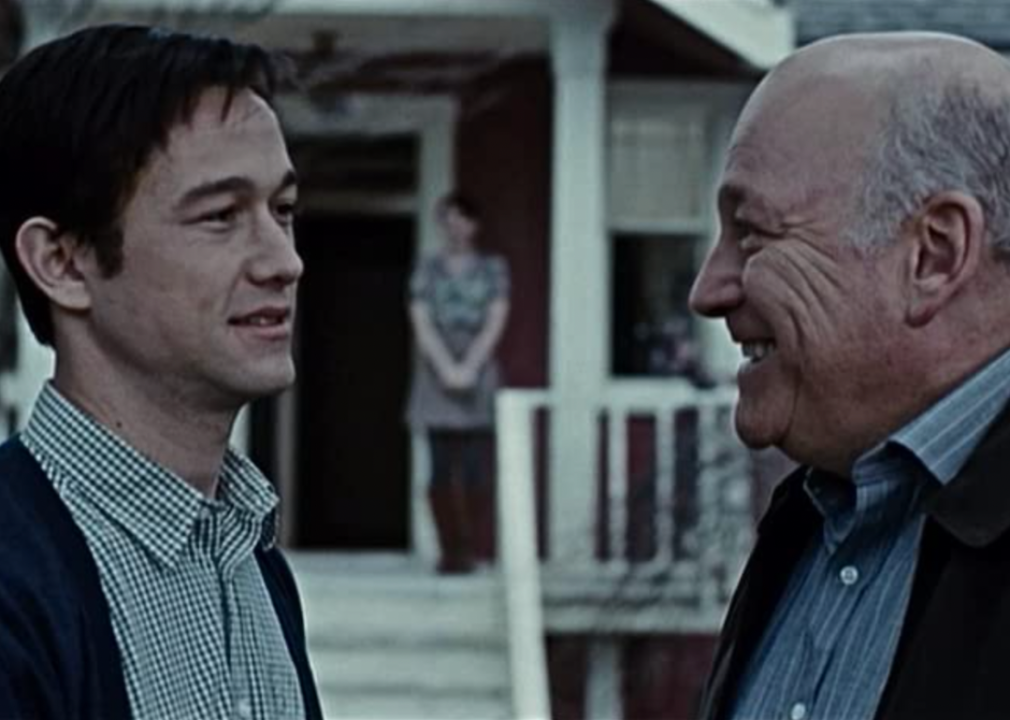 A still from 50/50 in which Joseph Gordon-Levitt, Bryce Dallas Howard, and Serge Houde stand outside 404 Ingleton Ave N

Cancer and comedy don’t typically go hand in hand. That said, the 2011 film “50/50” is a notable exception. “50/50” is based on the real-life experiences of its screenwriter, Will Reiser, who was diagnosed with cancer at the age of 24. It was produced by Seth Rogen, who co-stars in the film as Kyle, a fictional version of himself, as he was friends with Reiser at the time of his diagnosis. The film follows Adam (Joseph Gordon-Levitt) as he copes with a type of cancer that has a 50-50 survival rate, mainly focusing on his relationship with his mother (Anjelica Huston) and best friend Kyle.

Some of Adam’s most emotional moments, including the downfall of his relationship with his ex-girlfriend, take place in his quaint red house, a home located in Burnaby, bordering North Vancouver. According to Zillow, this building dates back to 1931; its 2,238 square feet features four bedrooms and two bathrooms. Unfortunately, the house is neither for sale nor does it contain Gordon-Levitt, but if you ever find yourself in the neighborhood of Burnaby Heights, it’s definitely worth stopping by. 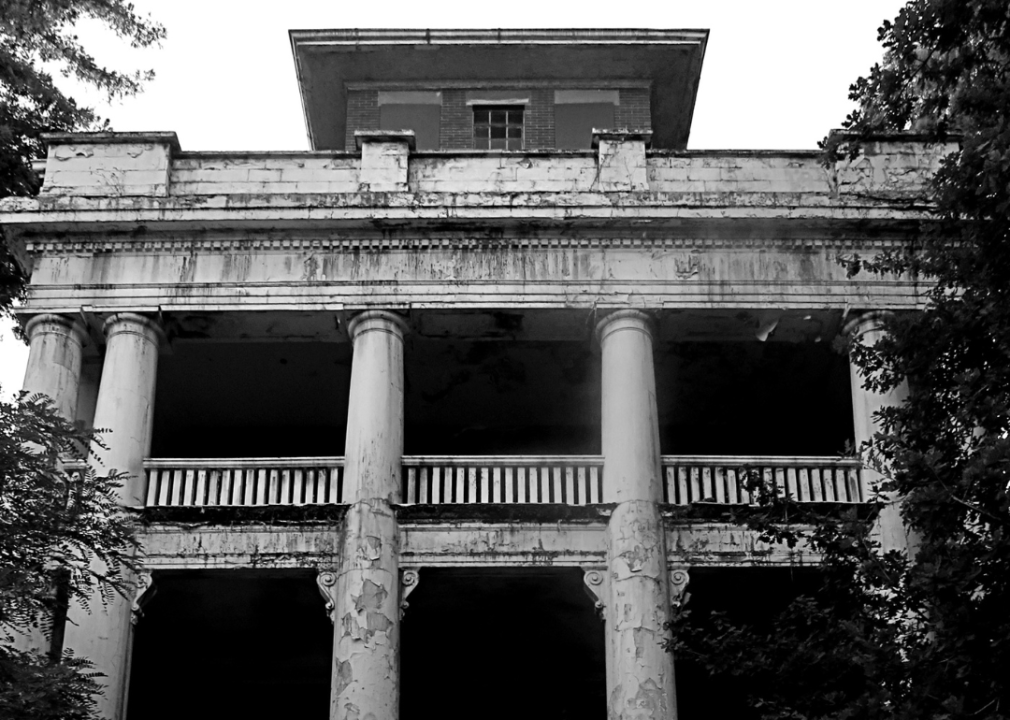 The exterior of Riverview Asylum

Riverview Hospital is known as one of Canada’s most filmed locations and “the most-filmed location in the Pacific Northwest” for good reason. The now-defunct mental institution is well-worn, with faded red brick, ominous bars on its windows, and plenty of alleged ghost sightings that definitely lend the property to the horror genre. And plenty of horrors have been filmed there, including “Halloween: Resurrection,” “Shutter Island,” and “Jennifer’s Body.” Riverview cannot be defined, however, by one genre; it also served as a set for action films and several comedy standouts.

It functioned as a Hong Kong prison in the Jet Li action film “Romeo Must Die” and a military facility where Dr. Manhattan obtains his powers in Zack Snyder’s “Watchmen.” Two of its most famous uses can be attributed to the legendary action-comedy series “Deadpool,” as both the first and second installments in the series used the location. “Deadpool” utilizes the hospital as the laboratory where Wade Wilson (Ryan Reynolds) is tortured into becoming the titular mutant; “Deadpool 2” features two different Riverview buildings as the Essex House for Mutant Rehabilitation, where young mutant Russell (Julian Dennison) lives. 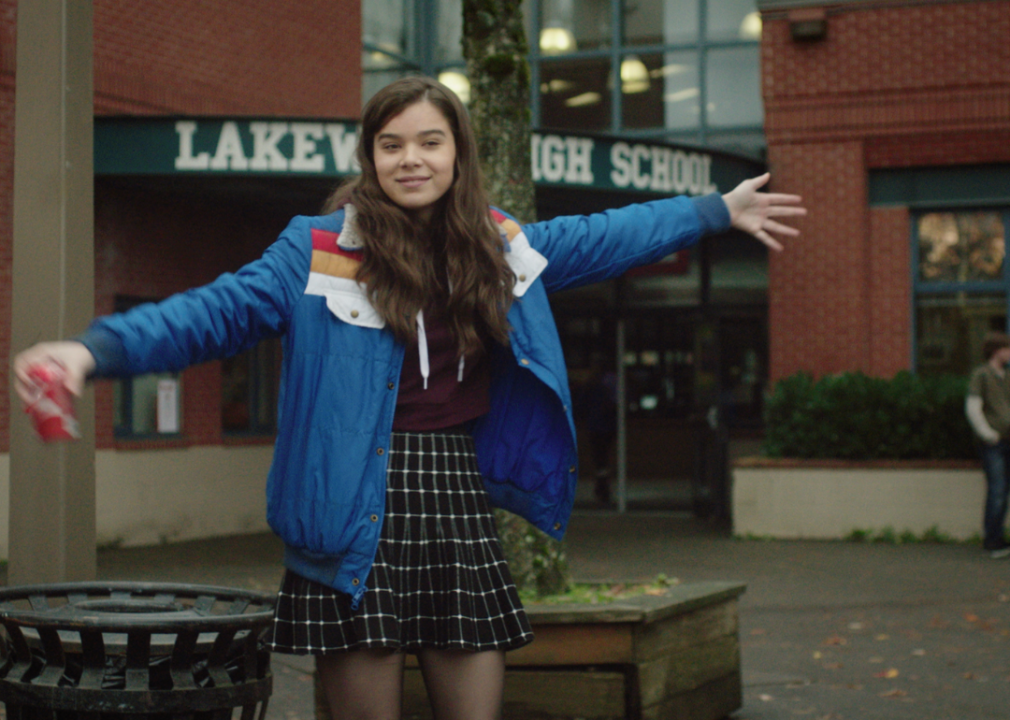 Lakewood High School in ‘The Edge of Seventeen’

Director-writer Kelly Fremon Craig’s “The Edge of Seventeen” is a coming-of-age film following Hailee Steinfeld as Nadine Franklin, a stubborn and awkward junior in high school. A vital aspect of the film is the relationship between Nadine and her teacher, Mr. Bruner (Woody Harrelson), who becomes the one person she feels she can vent to—therefore, much of the movie plays out at Nadine’s school, Lakewood High.

Lakewood is actually Guildford Park Secondary School, located in North Surrey, a municipality of Vancouver. Classroom scenes were filmed on school grounds, and real Guildford students can be seen as extras in the background. The grade 8-12 school had approximately 1,300 students of diverse ethnic backgrounds at the time of filming, with over 51 languages spoken. The school was not the only Vancouver locale to appear in the film: Nadine’s home and the theater from the film’s finale were also shot in or around Vancouver as a stand-in for Portland, Oregon. 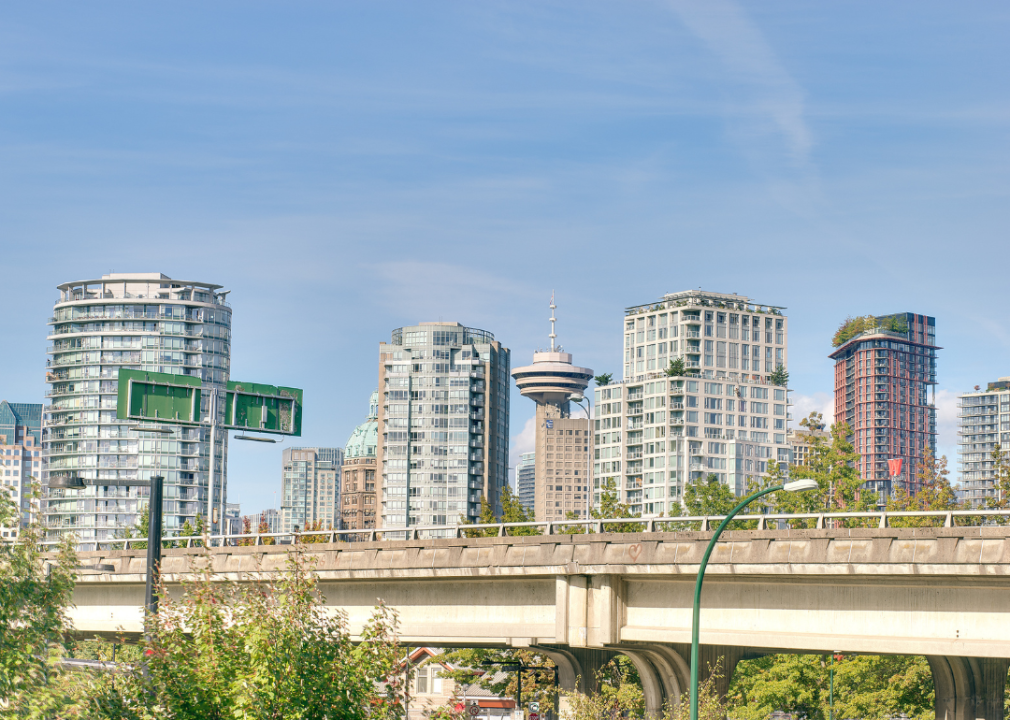 The freeway we keep returning to in ‘Deadpool’

“Deadpool” is a major claim to fame for Vancouver as a top-tier filming location, which should be obvious as both it and its sequel have already been mentioned once on this list. In fact, the executive producer of the film, John Kelly, cited “budgetary reasons” and “the city’s increasingly positive reputation regarding its support for filming” as the primary draw of Vancouver for the films’ production.

One of the most used locations for the first film’s action sequences is the Georgia Viaduct, a twin overpass with the Dunsmuir Viaduct that runs between Rogers Arena in downtown Vancouver and Strathcona. It’s on this viaduct that the film opens with Deadpool attacking an enemy convoy, and this fight is cut back to several times with the film’s hero being joined by X-Men’s Colossus (Stefan Kapicic) and Negasonic Teenage Warhead (Brianna Hildebrand).

Ryan Reynolds, who, in addition to starring in the movie as Deadpool was also the film’s producer, stated: “Boy, that Georgia Viaduct saved our lives. It really did. A lot of lessons were forged … as I sat on that Georgia Viaduct, trying to figure out how the hell I’m going to get through this movie on the paltry amount of money they’ve given us to shoot it.” The viaduct has shown up in several action TV series as well, including “The Flash,” “Supergirl,” and “The X-Files.”

This story originally appeared on Giggster and was produced and
distributed in partnership with Stacker Studio. 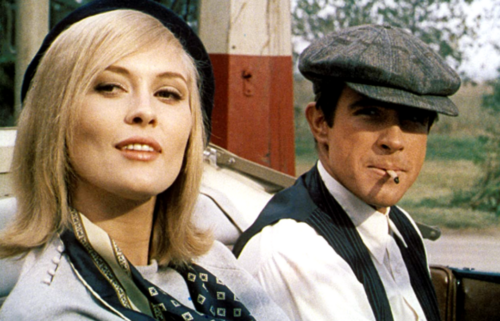 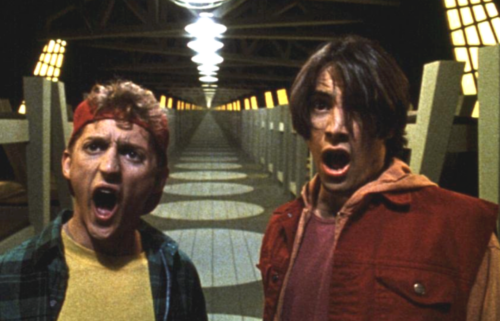 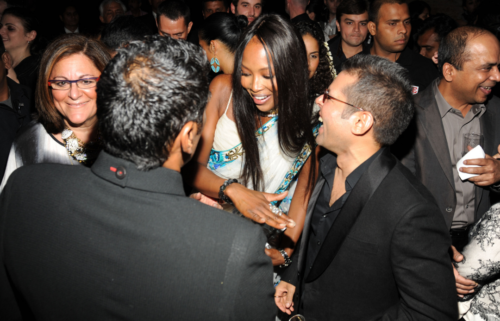