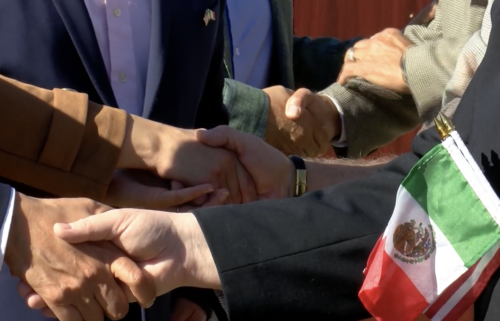 They’ve been picked up at border patrol headquarters and brought there by the non-profit.

Meaning all of the migrants are legally allowed to stay in the United States while their asylum claim is processed.

They test migrants for COVID-19, give them food and help them with travel plans.

“If we weren’t doing this, there would be much more difficulties arising in our area,” Alex Bejarano from the Regional Center for Border Health said.

Difficulties, like street releases in downtown Yuma or concerns over migrants potentially overwhelming other non-profits and local food banks.

At RCBH, workers show migrants a map of the U.S. to help them better understand where they are and where they’re headed.

The charter buses take most migrants to Phoenix, where they jump on another bus or a plane to their final destination.

Bejarano says RCBH pays for the buses to Phoenix and migrants pay for all their transportation and hotels from there.

“Every migrant who gets on our buses has a flight from Phoenix or a confirmation at a hotel near the airport if they can’t travel that day,” Bejarano said.

Bejerano would not say how much money RCBH has spent on assisting migrants but says FEMA has reimbursed them for some of the costs.

Bejarano adds the center has not had to suspend or slow any of its other missions due to the migrants.

Still, he says RCBH hopes for a solution to the border crisis, and that the record number of migrants crossing into Yuma can soon be a thing of the past.

“It’s not an easy journey," Bejarano said. "We definitely don’t encourage crossing the desert, or the border right now due to the high temperatures. We eventually would like to see this stop.”

With two months left this fiscal year for border patrol, Yuma agents have apprehended over 250,000 migrants.