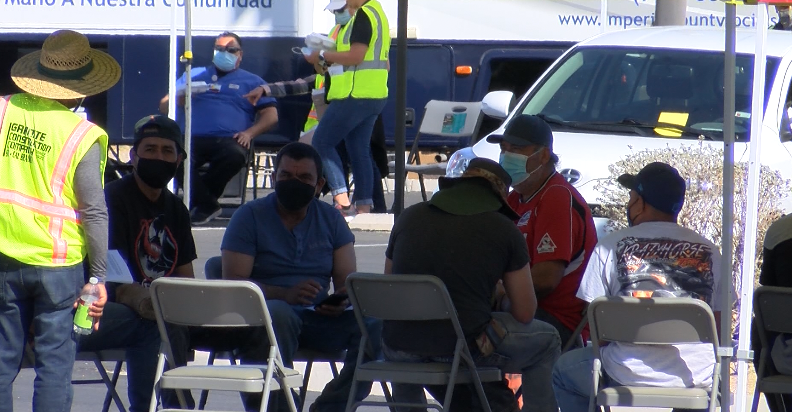 The clinic is one many have been waiting for even before the vaccine touched ground in the states.

The nation's farm workers have worked endlessly throughout the pandemic and have been labeled by the CDC amongst the highest at risk to contract COVID-19.

“We have become far too familiar with the data, the mortality rates and the highest risk among them the seniors, and the farmworkers and agriculture population as a whole," said Luis Olmedo, Comite Civico Del Valle.

The drive-thru style clinic was held at Imperial Valley College with the help of partnering agencies, including IVC's registered nurses who administered 1,000 vaccines to day labor workers.

Vans and huge trucks filled with ag workers arrived at the clinic, many looking tired and exhausted from a long day of work.

“I brought my aunts for the vaccine. I think it’s a good thing for them. They work for us putting food on the table so it’s very important," said Anthony Ornelas, Imperial resident.

Ornelas’s aunt has worked in the field for 15 years. She says this has been one of the toughest years by far.

“Well even more so for us that we travel together in cars, four, five, six people and sometimes one of our coworkers will start to cough and the first thing on your mind is the virus. So i’m just happy to be here today and have this opportunity," said Amalia Rodriquez, farmworker of 15 years.

Assemblymember Eduardo Garcia who was present at Friday’s clinic says the state of California is expecting to recive 3 million vaccines next week.

Garcia said a big chunk of the vaccines will be set aside for rural regions like Imperial County, but how many is still unclear.