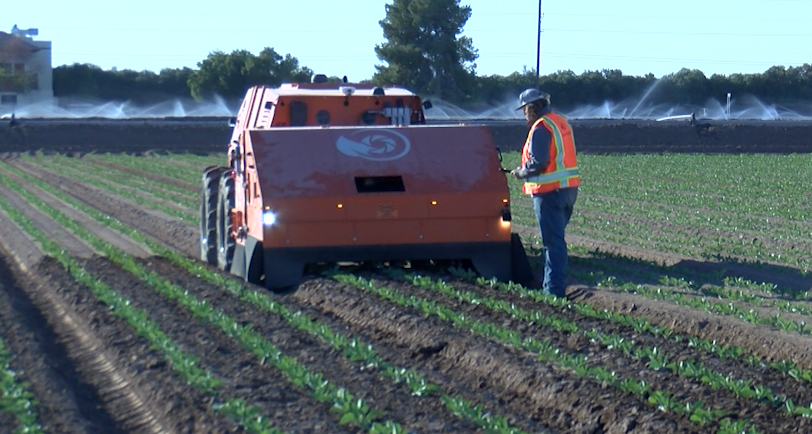 YUMA, Ariz. (KYMA, KECY) - Farmers are getting innovative as they utilize technology to assist them in feeding the world.

For this week's Home Grown, we showcase a new type of machine that can run mostly on its own.

Robots are raising the bar on agriculture by weeding and tilling the fields in a systematic manner.

Jason Mellow, head of field operations with FarmWise says this is just the start of a high-tech era.

"The vehicle itself is actually made of two components," Mellow stated. "It's a semi-autonomous tractor that's operated by an operator via a tablet, and there's an implement attached by a three point hitch."

The robot is registered to till the soil and get rid of those unwanted plants.

"It knows like the weeds it's actually seeing, and it eliminates those weeds and it saves the cauliflower," Mellow explained. "It's programmed to take care of the plant you want to keep and eliminate the weeds."

Detailed information is gathered about every cauliflower plant on the field. Then, it is sent back to the grower.

"They also collect data about each plant that's in the field. Every single individual plant," Mellow said. "We're working on more information and data collection in regard to soil composition and moisture levels as well."

The robots can be programmed for different types of crops and climates, but this is just phase one of what could substitute a farmer.

"There's no replacement for a good human being, right? The human eyeball and the skill set that humans have, it's very difficult for machines to replace that. I feel confident, though in the future, it will be," Mellow explained.

Between Yuma, Imperial County, Salinas and Santa Maria, these machines have been over thousands of acres of land. Mellow anticipates a continued improvement in these robots so they can be as effective as humans.

13 On Your Side's April Hettinger showcases these machines and their efforts on the farm in this week's Home Grown, Monday at 10 p.m.