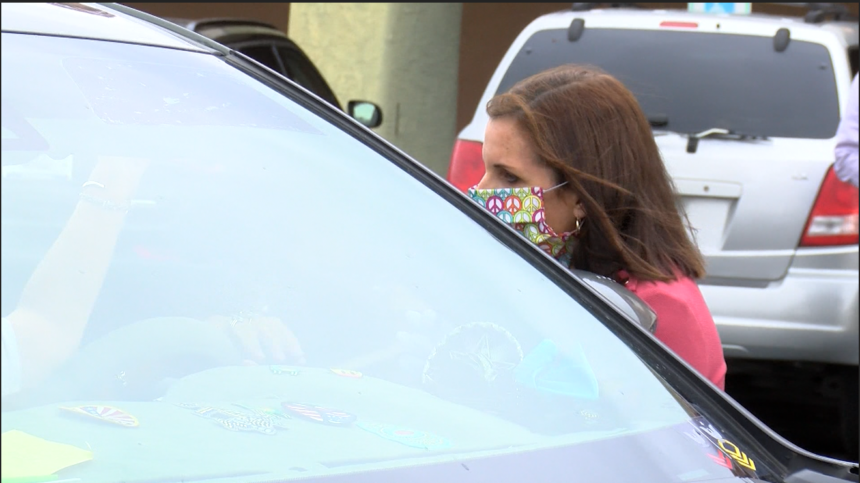 YUMA, Ariz. (KYMA, KECY) - A line of seniors in their cars filed into the damp parking lot of the Salvation Army in Yuma Wednesday morning.

They were waiting to receive a box of food and essentials, like toilet paper, from no other than U.S. Senator Martha McSally.

Captain Jeffrey Breazeale of the Salvation Army, told Sen. McSally that the non-profit hasn't seen an influx in need from the Yuma community.

However, McSally has funds coming their way.

“I’m going to help people with my paycheck. I’ve seized all fundraising operations for my campaign and I’m turning it into raising money for the Salvation Army,” said McSally.

The Republican senator from Arizona has raised $105,000 for the Salvation Army through her 15 Days of Giving campaign.

On the 8th day, she was in Yuma, meeting her constituents face to face.

Many of whom wanted to know if and when should they expect their stimulus checks?

She added, "The government knows your checking account information and they’ll be sending it directly to you."

McSally told seniors to check their bank accounts early next week for their $1,200.

But also told News 11, she’ll believe it when she sees it.

“Last time this happened it took about three months and [the federal government] is trying to roll [stimulus checks] out in three weeks," she said.

Until then, McSally believes funneling her money through a non-profit, like the Salvation Army, is the best way to meet some of the immediate local needs of the people.

The Salvation Army is providing rental, utility, and food assistance, along with other essentials, to people who are in need.

Monday through Friday, the Salvation Army feeds the homeless at several different locations and parks, making sure their needs are taken care of as well.

McSally said, “We've got some tough days ahead of us for sure, but we will prevail together.”

Another issue News 11 brought up to the senator is the growing number of border patrol agents infected with the coronavirus.

She does not support closing the border, as she says it's essential to our agriculture industry.

So right now, restricting non-essential travel, providing agents with protective equipment, and enforcing social distancing will have to do.