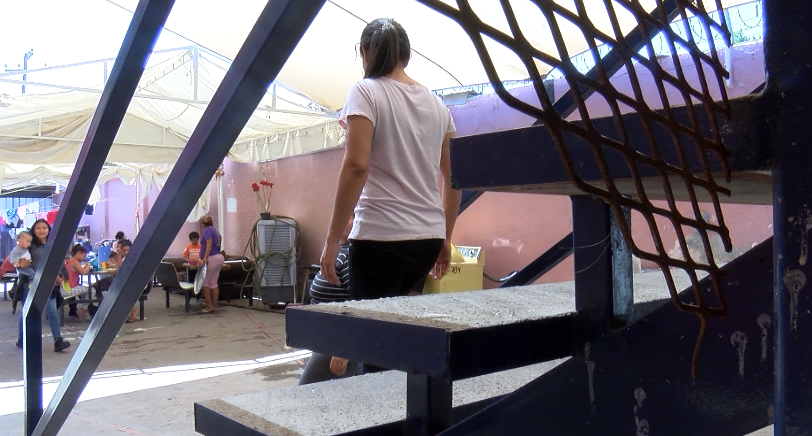 MEXICALI, Baja Calif. (KYMA, KECY) - A migrant shelter in Mexicali is nearing capacity due to an increase of undocumented people being deported back to Mexico.

One immigrant woman staying at the Cobina Posada del Migrante shelter in Mexicali says, her youngest daughter was only a few months old when she fled her country. Her baby girl is now three and her oldest is 5-years-old.

“I’ve been living here in Mexico for three years, waiting for an opportunity to cross to the other side," said a Honduran immigrant, seeking asylum in the U.S.

The Cobina Shelter is currently housing 178 migrants. It’s one of the few shelters that solely caters to taking care of mothers and their children.

“The families that are arriving right now are families that attempted to cross illegally and they’re sending them back. In the last nine days, I’ve had 24 families arrive," said Altagracia Tamayo, Cobina Posada del Migrante Founder.

Tamayo says the shelter is hitting its tipping point. She’s already figuring out a way to add extra beds in the shelter’s courtyard.

50% of the families they currently house qualify for the MPP Migrant Protection Protocol Program.

The only problem MPP court cases have dragged out for more than two years leaving families in limbo in Mexico.

Now with an added number of asylum seekers coming to the Mexico border, the bed space at the shelter is filling up.

She also says some asylum seekers are getting desperate and are seeking alternative ways to get to the U.S.

“It was simple and fast. We crossed over, we were taken into custody and they said there was nothing they could do for us and they sent us back." said a Honduran immigrant, seeking asylum in the U.S.

The shelter’s director says they’re starting to see immigrants who are being departed from Texas. As other border towns fill up she says many are getting dropped off in Mexicali.

Monday morning Tamayo received a visit from the state of Baja California’s Social Services Department. They came to see the conditions of the shelter and ask what she needed help with, something she says has never been done before.

Adding that no one has ever taken interest in touring the shelter.

She’s hoping the state will help bring resources to the Cobina Shelter.

Meanwhile, migrants seeking the american dream hope the Biden Administration opens a pathway to the U.S.