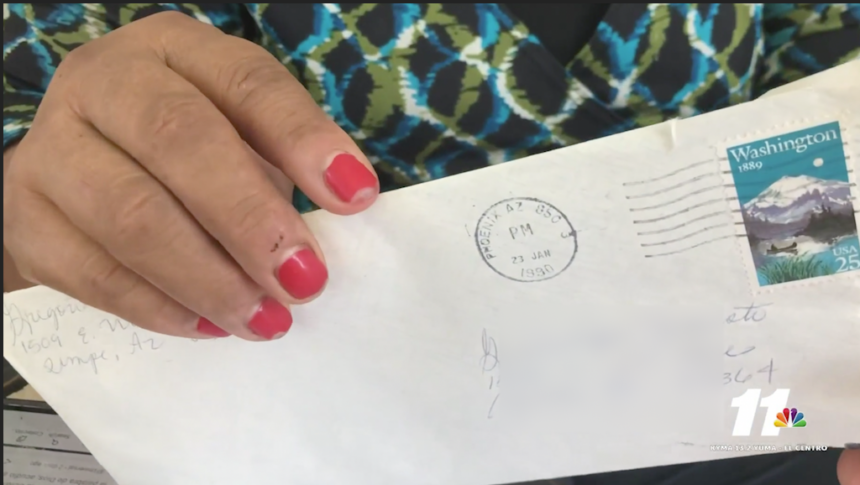 As President Trump questions the reliability of the U.S. Postal Service, so does one local family who recently received a letter postmarked decades ago.

Like many fairly new residents, from time to time, she’ll check her teal blue mailbox to find letters addressed to previous tenants.

But a recent piece of mail caught her by surprise.

Hales said, “In [my mailbox] was a letter from USPS. Then I looked at the postmark and it read 1990. I [said] this is something really special.”

When Grace retrieved the long lost letter, she noticed the sender was her brother-in-law, Greg Lopez.

Grace said, “It was eerie for someone to say Mama Lupe got a letter.”

Handwritten in Spanish, on a sheet of paper ripped right out of a spiral notebook, at the time Greg was a struggling sophomore at Arizona State University.

He was writing to repay his mother for money she’d lent him.

“My mom, she raised four kids by herself and I was actually the first one to go away to college. So I wasn’t used to paying my own bills. With a tail between my legs, I wrote to her and said mom I’m out of money. Can you loan me some money? I’ll repay you,” Greg explained.

As dated as it may sound, his family, to this day, stays connected through snail mail.

“My mom, up until last year, she still sent us birthday cards,” Greg said.

As a business owner, Greg understands USPS is a vital service.

He said, “Maybe somethings need to improve so it doesn’t happen. It was a bittersweet memory for us. It was good. But obviously, you want 100% of the letters and packages delivered, because [the mail] could be important.”

It may be three decades late, but Greg says his letter came right on time.

It reminded him of the values of hard work and independence his mother taught him.

Grace describes her mother-in-law as, “A very hard working honest person. She comes from Mexico with very little to her name. Just her dream to make a difference in this country.”

On their first Christmas without Mama Lupe, Grace is bringing a box of photos and keepsakes to share with the family, adding the lost, now found letter, to their memories.

News 11 reached out to USPS to find out exactly how this could have happened.

USPS was just as surprised as the Lopez-Frausto family to hear about the 30-year-old letter.

While he couldn’t explain the delay, one representative believes the letter may have gotten lost in a sorting facility, possibly out of plain sight until just recently.