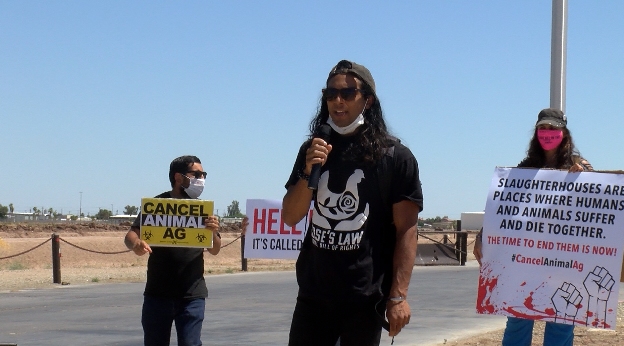 Mehta says the condition in which these animals live opens the door to new diseases that in turn not only affect the animals, but the people working in animal factories.

“Feces, waste, and antibiotics is a breeding ground for new virulent disease to merch out of.

The Centers for Disease Control published on their website that three out of four new emerging diseases are coming from animals,” said Mehta.

The animal activist group also brought attention to what they say is the exploitation and unsanitary working conditions of workers at One World Beef.

One World Beef recently made headlines after workers from the factory protested unsanitary working conditions amid the pandemic.

“There has been a coronavirus outbreak and multiple people inside of this facility have contracted the disease,” said Mehta.

Mehta says these employees work at factories out of necessity and need to be supported.

“We know what happens when an animal is valued more dead than alive and it’s a horrible horrible setting for every single animal and person involved,” said Mehta.

The Brawley Police Department was called to the protest. No one was arrested, but protesters were asked to get off private property.