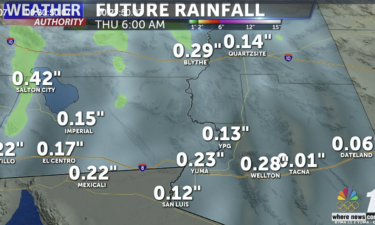 The flight of a lifetime

EL CENTRO, Calif. (KYMA, KECY) - Recognized for their blue and gold fighter jets in the sky, the Blue Angels will be showing off their skills at the Naval Air Facility (NAF) El Centro Air Show.

The Blue Angels invited News 11's Ciara Encinas on a ride-along to see how the skills they show off in the air feel firsthand.

Lt. Julius Bratton was the pilot behind the stick showing off how fast and slow the F-18 can go.

Lt. Bratton even demonstrated the fighter jet's maximum turn radius, which is 360 degrees. During the demonstration, the pilot hit 7.3 gravitational force (g-force). The Blue Angels explained the jet can only sustain about 7.9 g-force total.

All of the maneuvers demonstrated will be performed during the NAF El Centro air show on March 14.

NAF El Centro said the air show will go on, but the FoodFest is canceled.