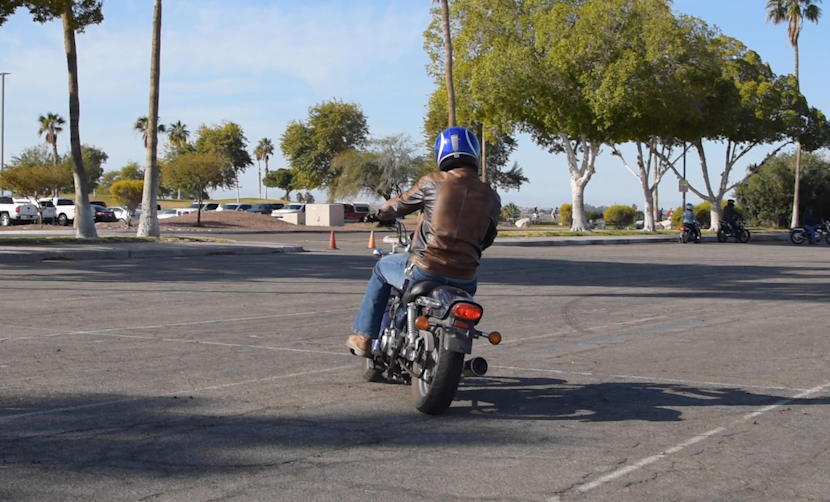 YUMA, Ariz. (KYMA, KECY) - A way of life for many comes with dangers beyond their control.

The National Motorcycle Institute claimed riding a motorcycle is 27 times more dangerous than getting behind the wheel of a car.
“Drivers, they don’t pay attention to motorcycles. They don’t look,” explained Brandon Bassham, rider.
“People lose their lives and that’s just over somebody texting when they make a turn or stopping too fast and that needs to stop,” explained Art Valdez, rider.
Drivers and riders alike are at fault for crashes. In fact, the Yuma Police Department said there were 32 motorcycle crashes in 2019, 14 were the fault of the motorcyclist.

Those hurt in the crashes are husbands, wives, sons and daughters, and even parents.
“The last thing I remember is getting off of work on Tuesday and waking up in the hospital on Saturday,” said Bassham.

His wife remembered the accident that changed their lives.
“I didn’t really believe it until I was actually on the highway and saw all the ambulances and the fire trucks,” explained Tara Bassham. "He was the only one in the middle of the road and [emergency medical technicians] around him.”

She said she just wanted her husband to be okay.
"I wanted him to not be in any pain. It hurt pretty bad,” said Bassham.

“I was supposed to be on the back of the bike with him," recalled Bassham. "We were lucky enough that I wasn’t on that bike and that the injuries he did have were extreme but he’s able to recover from most of them.”

Now left with modified motions, Bassham explained the struggles he faces.
“I have some nerve damage in my left arm. So there’s a lot of things that are tough to do," said Bassam.
Bassam's wife spent months taking care of him after the crash.
"There are still things that he can’t do the same that he won’t ever be able to. I mean there’s like modifications that we can do, but even as simple as holding the hand,” said Bassham while she began to cry.
The crash even caused him to leave his job, but Bassham isn't ready to let go of the handles.
"It’s not the motorcycle that causes it. It’s something that can happen at any time but a motorcycle is not at fault for what happened,” explained Bassam.

“Even though you’re not required to, I would definitely recommend you wear a helmet no matter what,” explained Bassam.

He credits his helmet for not sustaining more injuries in his accident.
In 2018, there were 2,738 motorcycle crashes in Arizona, according to the Arizona Department of Transportation.
Learning how to ride is a way riders can learn to react fast in tricky situations.

Joey Correa teaches motorcyclists how to ride in Yuma County and explained he does it to hopefully reduce crashes and fatalities.

He teaches riders the basic techniques that will help them in life or death situations, even taking them inside the classroom.

Correa shows riders how to properly check their equipment and even protect their bodies while riding.

He even explained to riders the benefits of sticking out on the road.
“Force people to see you - retroreflective effects," explained Correa.
But regardless of how long or how much experience you have behind the handles.

The lifestyle so many hold close to their hearts has the power to break it.
“I just figured my dad was going on another ride - no big deal. He’s done it a million times,” explained Art Valdez.
A ride that ultimately cost Valdez's father, Joe Valdez III, his life.
"Not only does it impact him not being here, but all the friends and family that he had. It’s hard. It’s hard to do things," said Valdez.
However, Valdez knows his dad died doing what he loved.
"I was pretty amazed to see how many people he had impacted. I never thought it was that many,” said Valdez. "He would give the shirt off his back.”
His dad is now remembered by the tank that kept him going. He requested his ashes be held in the gas tank of a bike he used to ride.

The tragic loss isn't stopping Valdez from getting back on a motorcycle.
"I never questioned riding it again, riding my motorcycles again. I did question paying more attention and slowing down. Sometimes it’s not just the car’s fault," explained Valdez.

He also knows it's what his dad would have wanted.

"My dad wouldn’t want me to stop riding,” said Valdez.