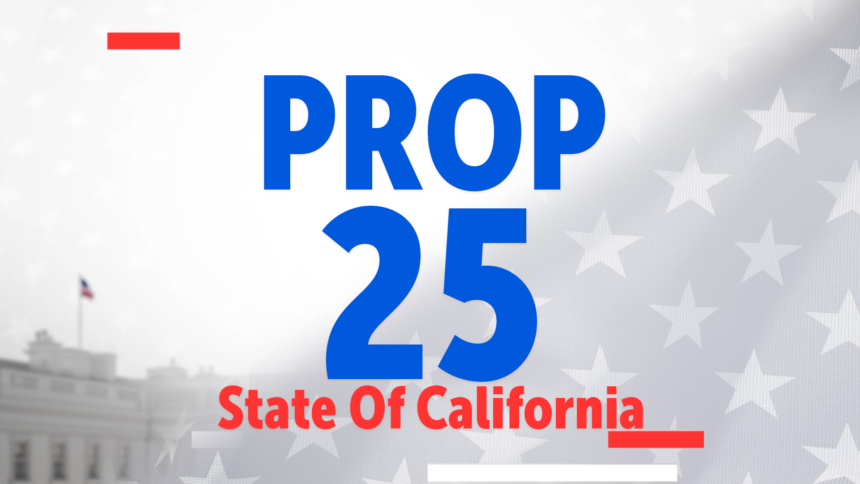 SB 10 was designed to make California the first state to end the use of cash bail for all detained suspects awaiting trials. The legislation would replace the state's cash bail system with risk assessments to determine whether a detained suspect should be granted pretrial release and under what conditions.

The risk assessments would categorize suspects as low risk, medium risk, or high risk. Suspects deemed as having a low risk of failing to appear in court and a low risk to public safety would be released from jail, while those deemed a high risk would remain in jail, with a chance to argue for their release before a judge. Those deemed a medium risk could be released or detained, depending on the local court's rules. SB 10 would exempt suspects of misdemeanors, with exceptions, from needing a risk assessment to be released

A “Yes” vote for Proposition 25 would uphold the conditions of SB 10 - and a “No” vote rejects it.

"Voter referendums are supposed to be about direct democracy - now wealthy people can simply write big checks. The reality is that California is the biggest bail market and has the highest bail rates in the country. If these companies can delay it for a year, they can make money for a year."

"There are countless examples of how unfair, and unsafe, this system is. Take Kenneth Humphrey, a Black senior citizen from San Francisco. He was accused of stealing $5 and a bottle of cologne, burglary and elder abuse. Unable to pay his way out, he was forced to wait in jail for almost an entire year before his court date. On any given day in California there are nearly 50,000 people just like Kenneth Humphrey – at risk of losing their jobs or their homes as they languish in jail. Meanwhile, Brock Turner was charged and convicted on multiple counts of sexual assault – a violent felony. Despite the severity of his charges, his bail was set at just $150,000. Turner, now a registered sex offender, paid his bail and was immediately released back into the community as he awaited trial."

"This legislation is a reckless attempt at changing the state's bail system and is fundamentally bad for California. While we all agree that bail reform is necessary, this costly, reckless plan will use racially-biased computer algorithms to decide who gets stuck in jail and who goes free. That’s not right."

-Jeff Clayton, Spokesperson for Californians Against the Reckless Bail Scheme

"The biggest flaw in SB 10 is the use of computer programs to make important justice decisions. These are the same type of algorithms that Big Data companies use to bombard us with ads every day. While I might appreciate an algorithm recommending books or television shows, I have long been against their use in making determinations over insurance rates, and whether or not someone gets a home loan or credit card. The use of algorithms has been proven to discriminate against the poor, minorities and people who live in certain neighborhoods. Relying on algorithms to make important criminal justice decisions is even more appalling."